Mexico has condemned new guidelines issued by the United States, under which almost all illegal immigrants can be subject to deportation. 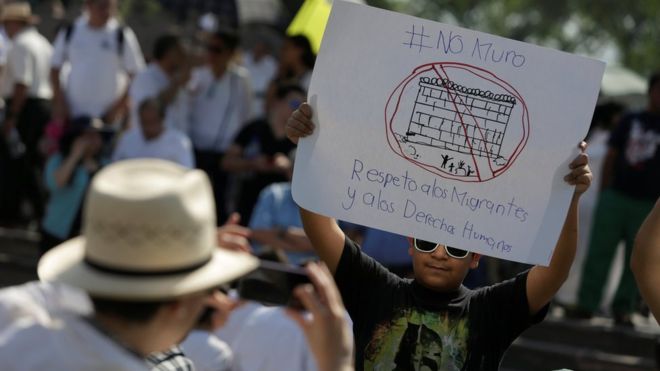 The new rules include sending undocumented people to Mexico, even if they are not Mexicans.

But Mexican Foreign Minister Luis Videgaray says his country cannot “accept unilateral decisions imposed by one government on another.”

Two top US officials are in Mexico to discuss the measures.

Secretary of State, Rex Tillerson, and the head of Homeland Security, John Kelly, will hold talks with President Enrique Pena Nieto, amid one of the most serious rifts between the two neighbours in recent years.

The changes announced on Tuesday include plans to enforce an existing provision of the US Immigration and Nationality Act that allows authorities to send illegal immigrants back to Mexico, regardless of where they are from.

But it is unclear whether the US has authority to force Mexico to accept foreigners.

Now, the new priorities are broad enough to apply to almost any illegal immigrant, including anyone who has been charged with a crime, misrepresented themselves, poses a risk to public safety, or “abused any programme related to receipt of public benefits”.

Expedited deportations can now be used against undocumented immigrants anywhere in the US, who are unable to prove they have been in the country for more than two years.

Previously, expedited removals were applied to people who had been in the country for less than two weeks and were within 100 miles of the border.

An estimated 11 million undocumented immigrants live in the US, many of them from Mexico.

What has Mexico said?

Mr Videgaray said on Wednesday that Mexico would not accept the new rules. “We are not going to accept that because we don’t have to and it is not in the interest of Mexico.”

“We also have control of our borders and we will exercise it fully,” he added.

He said his country was prepared to go to the United Nations to defend the freedoms and rights of Mexicans under international law.

Roberto Campa, head of the human rights department of Mexico’s interior ministry, said the plan to deport non-Mexicans to Mexico was “hostile” and “unacceptable”

Relations between the US and Mexico have been tense under Mr Trump, who has said Mexico will pay for a wall he wants to build on the southern border, expected to cost billions of dollars.

Last month, Mr Pena Nieto cancelled a planned meeting with the US president in Washington over disagreements over the wall.

What has the US said?

President Donald Trump made immigration and border control a key part of his campaign.

The government said the new guidelines would not usher in mass deportations, but were designed to empower agents to enforce laws already on the books.

Earlier, in Guatemala, Mr Kelly reinforced that the measures did not signal mass deportations.

“We will be looking primarily at criminal offenders first. But there will be no mass round-ups, and when we do take someone into custody, they’re then put into the American legal justice system, that’s the courts, and the courts will decide what’ll happen to them,” he told reporters.

Despite the tensions, White House Press Secretary Sean Spicer said on Wednesday that the relationship with Mexico was “phenomenal right now”.

He said he expected a “great discussion” between US and Mexican officials. The talks are expected to also include drug trafficking and the North American Free Trade Agreement, among other issues. BBC News