Sutton United have sacked reserve goalkeeper Wayne Shaw after he ate a pie live on television during the club’s FA Cup defeat by Arsenal on Monday night. 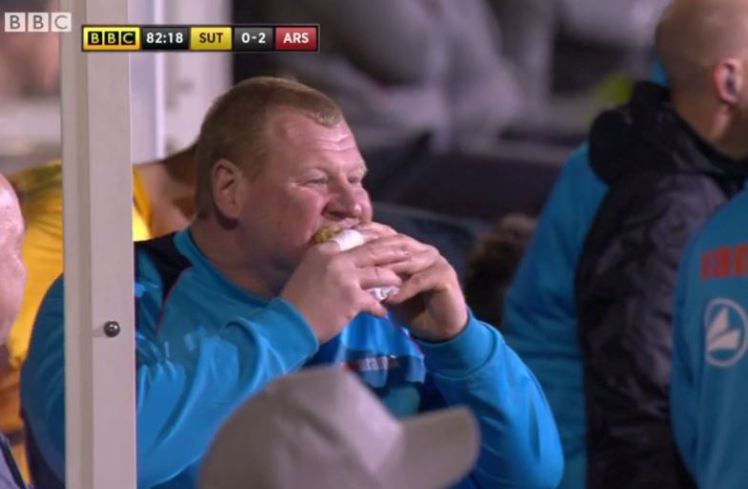 The 46-year-old was pictured live on television eating a pie after the club’s manager, Paul Doswell, made all three substitutions during the 2-0 loss at Gander Green Lane. After the initial comedy wore off though, the incident was revealed to be a publicity stunt for a betting company who offered odds on Shaw eating a pie during the match.

Both the Football Association and the Government’s Gambling Commission have launched investigations into the matter, but a club statement released on Tuesday confirmed that Shaw has accepted the club’s request for him to resign.

The statement read: “Wayne Shaw has resigned from his role at Sutton United following the events of last evening and subsequent publicity. He has said that he ‘fully understands the club’s position regarding this matter’.

“We are naturally disappointed that Wayne’s time with us should end in this manner, and would like to thank him for his contribution to the club and wish him well for the future.”

Doswell appeared on Sky News on Tuesday afternoon to confirm that the non-league club had sacked Shaw.

“It’s obviously early days [in the investigation] … but it’s taken the gloss off the performance for my players. It’s very sad that the spotlight has been taken away from them.

“The reality is that what happened last night didn’t make us look particularly good.”

Doswell explained that the goalkeeper, who doubles up as one of the coaches among his backroom staff, had allowed himself to get caught up in the media attention that surrounded Sutton’s fairy tale run to the FA Cup fifth round.

“I think Wayne’s been swept along in the last few weeks and he’s just made a very genuine mistake,” Doswell added.

“He’s obviously going to pay the price for his mistake. The first I knew about it was when I was taken up to see the written press after the game.

“I was asked but wasn’t really aware about it at the time.”

Asked what Shaw will do next, Doswell said he did not know as the decision had only just been taken.

“It’s early days for Wayne and he’s going to have to reflect where he’s at over the coming days … his position is just untenable,” he said.

“Obviously if he’d told me this is what he was going to do then I’d have advised him not to.

“I spoke to him this afternoon and he was absolutely devastated. There’s no joy coming out of this situation for him, a situation that had been such fun.”

As Shaw has severed all ties with Sutton, the club confirmed he will no longer stay at Gander Green Lane, having had a bed at the stadium so he could stay there on nights where he worked late to help prepare for match days. Contrary to what was being reported though, Shaw does have a home on the south coast where he stays the rest of the week.

Shaw appeared to be aware of the betting odds after the match, telling reporters: “A few of the lads said to me earlier on, ‘What is going on with the 8-1 [odds] about eating a pie?’ I said, ‘I don’t know, I’ve eaten nothing all day, so I might give it a go later on’.

“I went and got it at half time from the kitchen, I had it all prepared and ready to go. It was meat and potato.”

“As part of that we’ll be looking into any irregularity in the betting market and establishing whether the operator has met its licence requirement to conduct its business with integrity.”

The FA soon released a statement of their own to confirm that they after investigating the matter. An FA spokesman said: “We are investigating to establish whether there has been any breach of the FA rules relating to betting.” The Independent