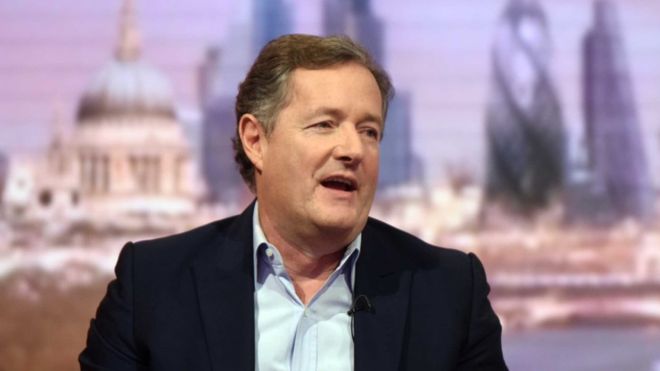 Presenter Piers Morgan has pulled out of hosting the Royal Television Society (RTS) Programme awards night after a campaign to remove him.

The host of ITV’s Good Morning Britain said he did not want to distract from award winners.

The Royal Television Society announced Mr Morgan as presenter of its programme awards on Thursday.

A petition stating it was “not acceptable” for Mr Morgan to present the awards got nearly 200 signatures.

Among those criticising him was awards judge Bonnie Greer.

Ms Greer tweeted that she was “honoured to be a judge” for the awards but would decline to attend the dinner because of Mr Morgan.

The playwright, novelist and critic cited Morgan’s defence of US President Donald Trump, who has attacked TV news organisations as “enemies of the American people”.

Emma Lindley, director of ITV’s My Parents Are Aliens, tweeted: “I don’t want Piers Morgan representing me or any other RTS members.”

But his co-presenter on Good Morning Britain, Susanna Reid, tweeted her support. She said: “There’s a lot that @piersmorgan and I disagree on. But as someone who knows what a very good presenter he is, I think this is a real shame.”

In a statement on his Facebook page, Mr Morgan, a former newspaper editor, said he had agreed to present the awards free “for fun” but that a campaign to have him “banned” had been launched.

He said it criticised his creative credentials and suggested he did not “understand a social movement that values equality and diversity of voice”.

“Apparently, this movement does not extend to tolerating my own diverse voice,” he said.

Mr Morgan wished the nominees luck and said he did not want this “silly noise” to distract from programme makers’ achievements. BBC News

Trump tries to explain remark about Sweden amid confusion