Four Budiriro family members, who perished in a well earlier this week, could not be buried yesterday following clashes between the family and church over burial procedures. 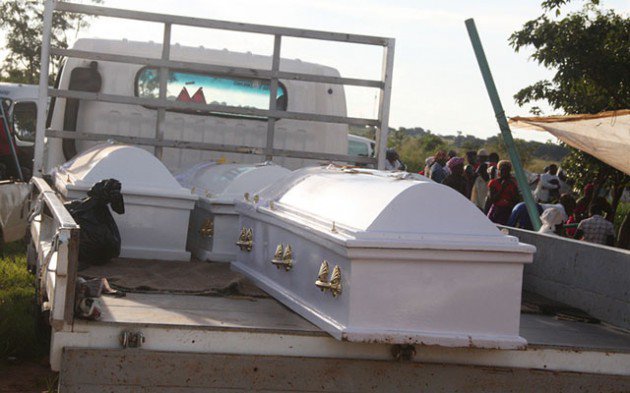 Mr Cleopas Jokomera (63) and his three sons, Maclliff, Tom and Cleopas Jr died in a suspected case of toxic inhalations and were supposed to be buried in Harare yesterday.

Funeral proceedings hit a snag when church elders from the Johanne Masowe WeChishanu Bethlehem of Judea, which the late Mr Jokomera headed said their church did not allow body viewing.

Witnesses to the incident said relatives refused to let church rules prevail over their deceased relatives.

“There was a scuffle as church members blocked the relatives from bringing down the coffins from the truck transporting the bodies, saying it was against their church regulations to conduct body viewing,” the witness said.

The heated arguments are said to have continued until police intervened.

Relatives who spoke to The Herald expressed disdain over the church’s decision.

Mr Tichaona Mundandanda, a nephew to the late Mr Jokomera, said the couple should have communicated their pacts with the family.

“The problem is with the couple, they did not inform their families what they had signed up for at their church. Now we are not sure if their church members are telling the truth,” he said.

He said after deliberations, the Jokomera family agreed for the church to “do what they want”.

“It hurts to think that we are going to bury four of my uncles without body viewing them.

“They had relatives and colleagues who need to see them and pay their last respects,” Mundandanda said.

Family members were also complaining that they had heard cases of sinister rituals performed on bodies and wanted to confirm if indeed their relatives were in the coffins before burial.

Church leaders, however, claimed that body viewing was sinful.

The church elders fled the place on hearing of the presence of journalists.

A church member, who preferred anonymity, equated the tragedy to suicide, so they could not allow the body viewing.

“The way in which our fellow church members died is questionable, hence some have been saying that it is not proper to view their bodies,” he said.

He said the late Mr Jokomera, as a church leader, insisted on burying church members without body viewing.

“The man who died is the founder of our church and he buried a lot of people the same way. Rules cannot bend on him. Where were his relatives when he was burying our own relatives?” he added.

Mr Jokomera’s wife and mother to the three late sons, Ms Grace Chikembe, insisted that the agreement with the church had to stand.

“It is our fault. We had not told our relatives what we had agreed to. Truth is, this is the life we chose and our relatives should accept it,” she said.

The bodies were still stuck in the truck late last night with indications that the burial would be conducted today. The Herald