Sweden’s new ambassador to Zimbabwe, Sofia Calltorp, has said she would immediately start working to restart stalled investment here and resume exports from the southern African country that plummeted after the controversial land grab programme. 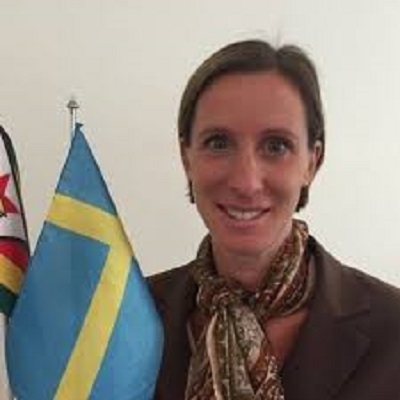 Welcoming pledges from President Robert Mugabe for improved cooperation after presenting her credentials at the State House on February 9, Calltorp — who has great experience from both the political arena as well as from the humanitarian field — said she also hoped for a “new phase of cooperation”, and that Zimbabwe’s exports of clothing and textiles to Sweden,  currently averaging a meagre $15 000 per annum, could be raised.

Mugabe struck a conciliatory tone after accepting Calltorp’s Letter of Credence from Prime Minister Stefan Löfven — leader of the Swedish Social Democratic Party who is also the head of government in Stockholm.

Zimbabwe desperately needs to revive manufacturing output and exports to stave off an economic collapse. The loss of export earnings has caused Zimbabwe’s gross domestic product to shrink by almost a third.

“Several big Swedish companies are already present in Zimbabwe and we will continue to encourage Swedish investors to engage with the Zimbabwean market — especially with the increasing opportunities arising within the mining and agricultural sector,” Calltorp said referring to Zimbabwe’s top forex earners.

“We will together with Open Trade Gate Sweden (OTGS) similarly continue to assist Zimbabwean producers and manufacturers that are keen to export to Sweden or to partner up with Swedish companies.”

OTGS provides requisite market intelligence to Zimbabwean companies, particularly those with the potential as well as the capacity to export to Sweden and the European Union (EU).

ZimTrade, in collaboration OTGS and the Embassy of Sweden in Zimbabwe, will host a seminar on ‘How to Export to Sweden’ at the Holiday Inn in Bulawayo today where participants from the clothing, textiles as well as leather sector are expected to attend.

This session follows a similar seminar held in Harare in September last year.

The mother of two said Sweden’s support to the Zimbabwean people dates back to the liberation struggle and was keen to see the continuous development of Zimbabwe.

She said she was “looking forward to sustain and strengthen the longstanding relationship between Zimbabwe and Sweden.”

Sweden’s commitment to Zimbabwe was also reflected in its development cooperation with Zimbabwe.

Each year Sweden provides $20-25 million in development assistance to the country via the United Nations (UN) and civil society.

“Sweden primarily supports initiatives that enhance gender equality, respect for rule of law and human rights, but also efforts that ensure that everyone has access to professional health services.

“Lastly, Sweden will provide more support to climate and environment programmes in the coming years,” she said.

Zimbabwe, led by 92-year-old Mugabe, has been subject to a series of restrictions, including an arms embargo and economic sanctions, imposed by the EU and the United States. But the EU has suspended sanctions against scores of Zimbabweans after the southern African country approved a new Constitution that curbed presidential powers in 2013.

The move underlines the growing belief in Brussels that Zimbabwe is pressing ahead with democratic reforms. Daily News