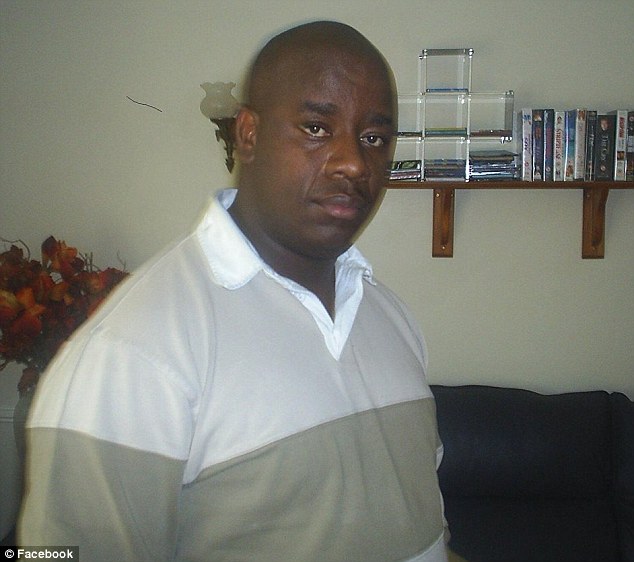 A hero neighbour raced to save two children from a devastating house fire that killed their parents and caught them as they jumped out the window.

Robert Chilowa, 46, a carer, rushed to the scene of the blaze in Withington, Manchester, in the early hours of Friday morning wearing only his pyjamas.

Four children, aged between 10 and 17, were injured in the house fire that killed their parents.

They are recovering in hospital, where they remain in a stable condition.

Mr Chilowa, who moved to the UK from Zimbabwe in 2001, said: ‘I followed where the scream was coming from and I got to the house and saw there was fire.

‘I wasn’t even wearing my shoes. I ran out the house in my pyjamas and headed to where the noise was coming from – which was only three houses away.

‘I turned around and there was this young girl there lying on the floor and she pointed at the window to say, “please can you save my brother and my sister – ask them to jump?”

Speaking to The Sun, he added: ‘I wasn’t scared for myself…I just didn’t want to see those little kids die.

‘It was so smoky and it was blazing hot so I couldn’t actually see very well.

‘I just outstretched my arms and shouted up to the kids “please jump into my hands”.

Five people in total were rescued from the house and are in a stable condition in hospital, according to Greater Manchester Police.

As well as the four children, aged between 10 and 17, a second man in the house also escaped the fire.

Fire chief Mark Threader said the blaze is believed to have been started in a room at the back of the house on the ground floor.

Police and fire investigators are still probing the cause of the blaze.

Detective Inspector Tony Lea, of GMP’s City of Manchester Team, said: ‘I’m pleased to report that despite their injuries, those in hospital are in a stable condition and are recovering well.

‘It is clear to me that without the brave and selfless actions of those at the time of the incident, the circumstances could have been even more tragic.

‘My thanks and well wishes go out to the neighbours and to the wider community for their continued support as we carry out our enquiries.’

Speaking at the scene, Chief Superintendent Was Chaudhry, from Greater Manchester Police, said the two victims were found dead at the house and described it as a ‘tragic incident’.

He said the cause has not yet been determined as the investigation was still in its early stages.

He made a public appeal for information and said officers had not ruled out foul play.

Mr Chaudhry said: ‘We follow a number of routes, whether that’s a crime investigation, whether that’s something that has happened in terms of with the electrics, the gas, utilities etc.

‘We have got to keep an open mind in terms of this whole investigation. There’s a number of hypotheses that we are following and it would be remiss of us at this stage just to narrow that investigation down without appealing for witnesses.

‘I would also like to appeal to the public, to local residents, that if they did see anything happening, shortly before 2.30am and during the course of the police and fire service response, then please contact us. That information could be the missing part of our overall investigation.’

He said the CCTV at the house will form part of the police inquiry.

Student Emily Puckering, originally from Hull, said she was woken at about 2.30am by shouting and screaming as the flames engulfed the house.

Miss Puckering, 22, said: ‘I could just see the smoke at first. When I woke up I realised how severe it was. I could see the flames coming out of the windows.

‘From my window I could just see flames and smoke. I couldn’t see people in the house, I could just hear them.

‘I could hear a woman, she was shouting and screaming. I’m assuming it was her house because I could hear her shouting to the fire brigade, “Please save my house”.

‘Finding out they passed away is heartbreaking, it’s such a tragedy, especially seeing as it’s possibly a crime scene now.

‘The fire service was absolutely amazing. There was three fire engines, two police cars, an ambulance, another van, I think, just from the council. A big response.

‘They put the fire out quite quickly. The fire itself was massive, it was huge.

Another neighbour who witnessed the drama said: ‘They were a close and nice family. They were always happy and had nice children.

‘We were sleeping and then at 2.30am my wife woke up and said that she heard a bang, so we got up and looked out the window.

‘She looked right and then she saw a lot of smoke. She looked through the window and then heard some more screaming.

‘My little sister said there was a fire and people were trying to break into the house. A few people were in the top window at the back and they seemed to be stuck. I rushed out to go to them.

They added: ‘The oldest girl was screaming because she jumped out the window and was in agony. All the kids were in the road.

‘At that moment we were faced with getting as many people out of the house as possible.

‘The fire brigade broke in the front and found one man on the staircase and dragged him out.

‘Their kids were shivering and cold. I got water for the kids. The older girl couldn’t walk or stand so I put a coat and hat on her.

‘It’s upsetting and we are all devastated. We set out to save as many lives as we could.’

Retirees Harry, 71, and Sylvia Smith, 73, said: ‘Our son Steven walks past their house every day on his way to work and the children always wave at him from the window.

‘Last night, a neighbour was giving out drinks and blankets to people on the street as there were a lot of neighbours out.’

The elderly woman who was handing out the blankets, but not did want to be named, said: ‘I just heard screaming some time after 2am and got up to see what it was.

‘I couldn’t hear what they were saying but they were clearly in distress. I can only see the garden, not the house, because we are at right angles.

‘I phoned 999 but someone else must have already done it because they arrived almost immediately.

‘They got out who they could and everyone sat down in the garden. The police asked if we had any blankets. We were able to help a tiny bit.

‘There was a lot of black smoke and damage to the windows. Everyone who got out was injured to some extent.

‘The road was so full of ambulance and police cars that we didn’t get back to bed until well after 4am.

‘We didn’t really know them. Two of the children knocked on the door a couple of times because their cat was locked out of the garage.

‘I believe they come from Gaza in Palestine and bought this house off a relative a couple of years ago. Before that it was always rented out.

‘Everybody in the area is shocked by it. It was horrible to see the kids sat on the garden crying.’  Daily Mail

Taking on Trump: Is the US facing a constitutional crisis?