CAPS United marketing director Hannah Wright believes Makepekepe players will get inspiration from the efforts of the club’s leadership after the Green Machine yesterday unveiled new kits for the 2017 season. 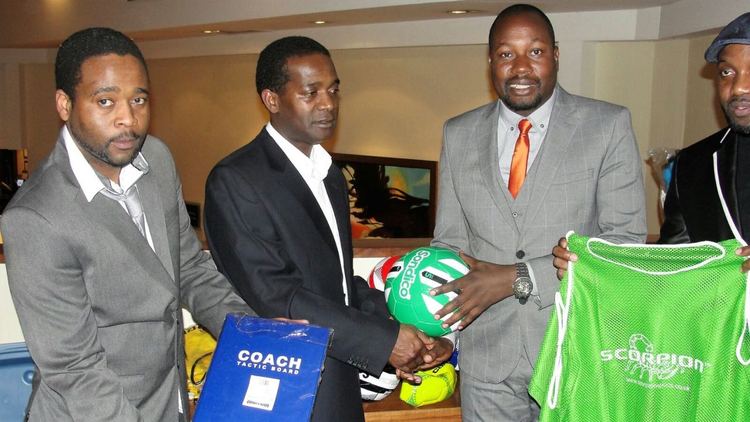 Wright presented to the Green Machine players and staff the home and away playing kits and tracksuits manufactured by their technical sponsors Roar Sports Gear and Equipment ahead of the trip to Lesotho for the CAF Champions League tie against Lioli.

The former Newcastle United marketing guru also handed over a new set of training bibs, soccer balls, drinking bottles and a cooler box donated by a group of the club legends based in the United Kingdom.

The equipment was sourced by the club’s president Farai Jere who had been on tour to the European country where he had meetings with former players who included legendary midfielder Joe Mugabe and defender Frank Nyamukuta.

Wright said the equipment and the kits should be a huge source of motivation and unity in the club.

She added that the club’s participation in the Champions League should bring Zimbabwe together in support of Makepekepe.

“We are all very excited with the game coming up this weekend and I think CAPS United have a very good chance.

“We are not just a club, but we are representing Zimbabwe this weekend and we have all the hope in the world for our boys playing this weekend.

“People really don’t realise what goes on behind the scenes at a club like this.

It’s so exciting for them to be travelling and going for some friendlies in Zambia and having a new kit just make them feel more of a team than ever and all being united.

“That is what CAPS United is all about, we are one big family. So it’s exciting.

“The players are excited and they appreciate that the club has gone that extra link to organise them a kit before the big game this weekend,” said Wright.

The marketing expert also announced Makepekepe have lined up a number of potential sponsors.

Makepekepe have also entered into a partnership with Aurex Jewellery to manufacture branded ornaments that include badges, rings, earrings and pendants.

CAPS United supporters, who had hoped to return home with replica jerseys were, however, disappointed that the stuff was not yet ready.

“We are looking into that. As far as we have been discussing within the club, we will be having our own vendors here on the match day who will be selling our original merchandise.

“We are also looking at opening our own CAPS United shop at some point and also our website. We will be launching our website soon and all information will be available on the site. As soon as that is ready to be launched we will let all the media know.”

Piracy, however, remains a huge threat to their efforts.

“We can’t stop it. It’s a big country, but on the match days we are going to make every effort that only our registered vendors will be allowed in to sell the kit and we will have our own shops.

“So if you want original CAPS stuff come to our shops or during the local games. Don’t buy it cheap on the street because you will not get good quality as ours.

“We are working on the prices. We have ordered so once we have got it all here we will then be able to (put the price tag) but it will be reasonable.

“We going to make sure that everyone will be able to afford a jersey or the tracksuit,” said Wright. The Herald