Jailed for protesting’ read one of the posters at the Vigil as we gathered in outrage at the arrest of Pastor Evan Mawarire, leader of #ThisFlag movement who was pounced on by a gaggle of CIO people at Harare airport when he arrived back on Tuesday. 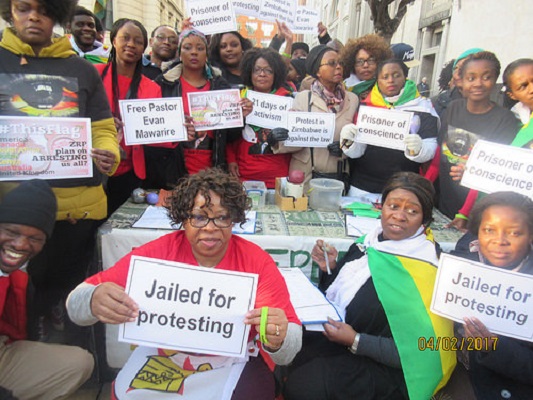 Bizarre seems to be the headline of choice for some websites to grab your attention. The scoop may be ‘goblins having sex with teachers in school’ or ‘Zimbabwean musician videos himself committing suicide’ or maybe ‘woman gives birth to frog baby’.

Well here’s the Vigil’s ‘scoop’. Human rights activist faces 20 years in jail for saying he doesn’t like the government – that is, if he is lucky.

Evan astonished everyone by his decision to return only six months after fleeing with his family to safety in the United States – defying divisive rumours fostered by the CIO. Why did he return? Surely it couldn’t be that he is a brave man acting out of love for his country? He must have known what he faced.

His lawyer Fadzayi Mahere posted: ‘Pastor Evan Mawarire has been classified as a “D” Class remand prisoner and is being detained at Chikurubi Prison where convicted murderers are held, instead of the normal remand holding centre. This is not about Pastor E as an individual but it’s a battle for the soul of Zimbabwe. Are we a constitutional democracy – where free speech, free assembly, free conscience and political rights are respected – or not? Do we speak out; do we choose apathy? Do we hold onto disappointment that he chose family over fame – or do we rally behind what his incarceration represents for us as a country? Police cells are awful. Remand prison is inhuman. Chikurubi serious crimes section is hell.’

Evan can be comforted by the victory of protesters in Romania. Earlier this week hundreds of thousands gathered in the capital Bucharest and other cities to protest at a government decree allowing those guilty of corruption involving less than about $50,000 to escape prison.

Romanians were proud that their notoriously corrupt bureaucracy had been steadily cleaning up its act since joining the European Union. They weren’t persuaded by the government’s insistence that the decree was for the best and duly turned out to protest the next night, and again the following night. Now the government has given in.

Hopefully Evan and people like him will see this same happy outcome in Zimbabwe. If he survives. The Vigil notes that a senior British diplomat has just been in Zimbabwe to see the situation for herself. We hope she will get the British government to tell Mugabe: if Evan dies in prison so do British diplomatic ties with Zimbabwe.

Vigil founder member and President of ROHR Ephraim Tapa told the Vigil that, with less than 18 months before the next elections, Zimbabwean activists should brace themselves for more persecution, abductions, torture and imprisonment. The Vigil displayed a poster from a ROHR supporter in Harare, Linda Masarira, who has launched a campaign for #21daysofactivism demanding changes every day until Mugabe’s birthday.

For latest Vigil pictures check: http://www.flickr.com/photos/zimbabwevigil/. Please note: Vigil photos can only be downloaded from our Flickr website. The facebook page for our sister organisation Restoration of Human Rights in Zimbabwe (ROHR) (https://www.facebook.com/ROHR-Zimbabwe-Restoration-of-Human-Rights-301811392835) has been hijacked by destructive elements from a group calling itself ZHRO. Please be advised that any postings on this page are not posted by ROHR.

FOR THE RECORD: 68 signed the register.

The church and its neglected role