Dancing while soaked in sweat, Peter Moyo’s dancer Judah was one of the major highlights at his show held at Jazz 24 /7 on Friday. 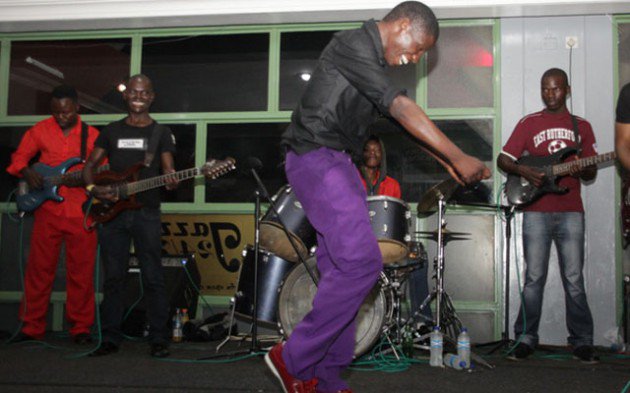 The Young Igwe, as Moyo is known, performed late into the night for a crowd of screaming fans and with expertise from his energetic dancers and lead guitarist Baba Gari, he managed to wow the revellers.

Although Moyo’s performance was on point, it was his back-up dancer’s energetic and unbelievable dancing skills that had fans throwing money at the young dancer.

The crowd kept calling for Judah who gladly danced the night away with a big smile on his face.

To add to the excitement, Moyo’s guitarist popularly known as ‘Baba Gari’ was cheered by fans with some giving him money.

Utakataka Express chanter Gift ‘Shiga Shiga’ Katulika made sure he gave a lively performance whilst fans danced to his lyrical chants.

The ‘Vakomana Vekuchena’ crew lived up to their name as they were smartly dressed in black and purple.

The show ended around 3am and fans went away satisfied that the musician still has potential to challenge big names in the land.

A fan named Collins Mugaiwa was one of the happy revellers who expressed how much he had enjoyed the show.

“It was a good show. I think Peter is growing better and better and his band is very talented. I really enjoyed the show,” he said.

Another fan, Fadzai Murimi, praised the dancers’ choreography saying it motivated the fans.

“The dancers are just full of energy, they make us want to dance too,” she said.

Peter says he will continue doing live shows to promote his ‘Mabasa aMwari’ DVD that was launched late last year. He is also working on a new album to be released later this year. The Herald

Man slams toddler to the ground