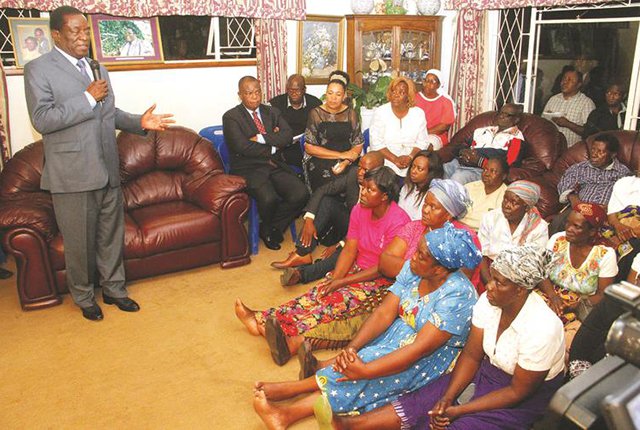 He will be buried tomorrow at the National Heroes Acre.

Chanetsa (70), the first black chief of protocol in independent Zimbabwe, succumbed to heart failure at Parirenyatwa Group of Hospitals.

His body will be taken to Chinhoyi this morning before being brought back in the evening ahead of burial tomorrow.

He said the announcement of the hero status had been delayed because many Politburo members were still on holiday.

“I phoned the President telling him about the death and he told me that he had learnt about it through the First Lady who had read about it on the Internet,” Mnangagwa said.

“I told him that Mashonaland West Province had indicated that it was sitting down to deliberate on his history and make recommendations. The province finally sat down and forwarded its papers but we had two days before coming back to you. As leadership here we had sat down but many Politburo members are out of the country and we had to consult everyone. Most of them responded in favour of your recommendation. We sent the details to the President and this morning while in Bulawayo, I managed to talk to him. He had left China for Singapore and he said tell the relatives that I am in agreement. So,  Chanetsa has been granted national hero status. It is now official everything from now will be done by the Government through the Ministry of Home Affairs.”

Mnangagwa said Chanetsa, who was a Zanu-PF Central Committee member at the time of his death, never vacillated on principle.

“We were all saddened when we heard that Chanetsa is no more,” he said.

“He was with  Richard Ndlovu, our former deputy commissar from Plumtree when I last saw him during the last Central Committee meeting last month. They said they wanted to see me. I agreed in principle but walked passed them but that was the last time I met  Chanetsa perhaps he wanted to say something.”

He said he met Chanetsa in 1977 in Tanzania where he would welcome the country’s leadership during the liberation struggle as the chief of protocol each time they went there for political meetings.

“Each time we left Mozambique for Tanzania he was there to welcome us,”  Mnangagwa said.

“We worked together throughout and even at the Lancaster House Conference he was our protocol officer.”

Family spokesperson Mr Kenneth Chanetsa, said the family felt honoured by the granting of the national hero status to his brother.

“We never thought he would get this far,” he said.

“We thank the party for honouring his works. It is you who worked with him as a party and we never knew he did so much for the party.”

Politburo member and Lands and Rural Resettlement Minister Dr Douglas Mombeshora, who hails from Mashonaland West added: “As a province we felt that our hero has been granted so highly. It is evidence of the work that he did throughout the time he lived.”

Chanetsa was the first black chief of protocol at Independence before being appointed Mashonaland West Resident Minister and Governor in 1996.

During his tenure as Governor, Chanetsa oversaw the crunch phase of the land reform programme in his province in the early 2000s.

Apart from being a politician and farmer, Chanetsa had interests in safari and fishing businesses.

Born on 15 July 1946 in Chinhoyi, Chanetsa first had his education in that area before proceeding to Mabvuku in the then Salisbury.

He then went to Mwanza, Tanzania where he later hooked up with other locals and received military training in that country.

He came back at Independence in 1980. He is survived by wife Beatrice and three children. The Herald