Arsenal completed a dramatic comeback at Bournemouth as they rescued a point in injury time having fallen 3-0 behind. 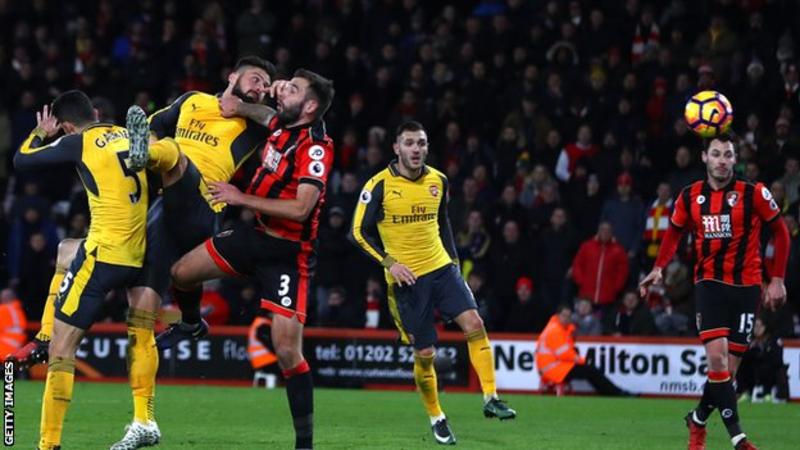 The Gunners looked destined for a third away league defeat in a row before a late rally that began with a diving Alexis Sanchez header and gathered momentum when a stunning Lucas Perez left-footed volley reduced the gap to a single goal.

Bournemouth went down to 10 men when Simon Francis was sent off for a challenge on Aaron Ramsey and Arsenal capitalised as Olivier Giroud headed a 92nd-minute equaliser.

The home side had overwhelmed the Gunners early on and taken the lead when Charlie Daniels cut inside Hector Bellerin and stroked a shot past on-rushing keeper Petr Cech.

Callum Wilson scored a penalty to extend Bournemouth’s lead and Ryan Fraser sent a shot through Cech’s legs for the Cherries’ third before the hour mark.

But the hosts buckled under Arsenal’s late pressure as Arsene Wenger’s side moved eight points behind Premier League leaders Chelsea, who play Tottenham on Wednesday.

How the comeback unfolded

Arsenal had produced a feeble display for 70 minutes and were second best in the face of Bournemouth’s energy and desire but that all changed when Sanchez headed in at the far post following Giroud’s flick-on.

The momentum of the match changed and five minutes later Giroud clipped a lovely ball to substitute Perez and he sent an angled volley inside the far post.

Giroud headed in from a Granit Xhaka cross as Bournemouth failed in their desperate attempts to hang on during six minutes of added time.

Arsenal manager Arsene Wenger: “At the start we suffered from the quality of Bournemouth. One team had over three days to recover and on top of that we suffered at the back.

“It was a physical test but we came back into the game and we showed we are mentally strong. I am happy to play every day but only if our opponent has done the same.”

Bournemouth boss Eddie Howe: “It’s a strange one for us. At 3-0 up you hope the game is over but you can’t underestimate the quality of Arsenal and as soon as they got the first goal the game changed.

“We didn’t see the game out in an effective manner from our perspective but you have to praise their resilience.”

It’s FA Cup third-round action for both these teams in their next outings with Bournemouth at Millwall at 15:00 GMT on Saturday, 7 January and Arsenal at Preston for a 17:30 kick-off on the same day.