PSL title. . . It was won where it began for Sibanda, Muchambo

The league championship triumph for Caps United’s safe hands Edmore Sibanda and Jorum Muchambo is very unique as the quest for gold climaxed right where their elite journey got off against the same team that gave them the starting platform. 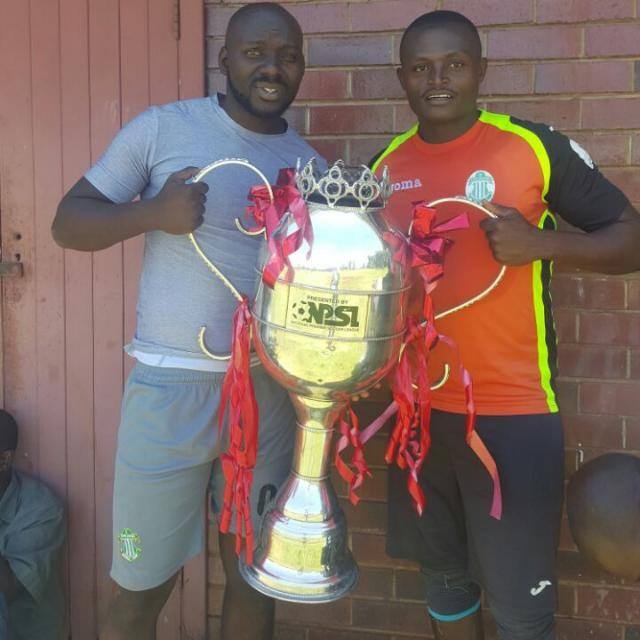 Ascot Stadium in the Midlands capital of Gweru might not be known as a home to a championship winning outfit but twice in the last five years the title has been decided by duels on that thick turf with the ultimate crowning moment.

First it was Dynamos march to their second of the four consecutive titles with a 1-1 draw against Hardbody with a chartered chopper delivering the trophy and gold medals in 2012, turning the Gweru home of football into a celebrating den.

On a rain drenched Saturday, Simba Nhivi’s 69 seconds strike once again brought glory to another visiting Harare outfit Caps United sealing a marathon race that witnessed multiple twists and turns similar to those at Boterekwa escarpment – just a few kilometres from that stadium.

But for two of the Green Machine stars, in fact rotating safe hands, Sibanda and Muchambo this glory was just an addition of a triumphant chapter of two soccer operas whose premiership openers are domiciled at the same council owned stadium.

More closely, glory which looked imminent even before kickoff came at a cost of the team, Chapungu, which inked their premiership debuts – a year apart, 11 years ago – the year the last title was delivered to Makepekepe.

After seeing out action from the bench for the better part of the 2005 season, the year Cuthbert Malajila, the late Gilbert Nyakudanga among them were notable premiership debutantes for the airmen, Jorum was to earn his debut on 25 September 2005 against Masvingo United.

As expected of a debutant the then young Jorum, recommended to Chapungu by his brother Brighton was a bundle of nerves allowing a Cyprian Muchabaiwa late strike, a winner which referees diabolically credited to Isaac Nyausaru who was also lurking in the box.

Forgotten star midfielder Malvern Nyakabangwe’s brace had thrust the visiting busmen 2-0 ahead before a Phillip Marufu double almost stole a point for the airmen but Muchabaiwa had other ideas with five minutes left on the match clock.

The then ginger-haired saw a then drawn out inexperienced Jorum to get home the winner from a melee in the box handing Masvingo United a 3-2 win and the goalkeeper’s premiership debut was to get off to a tormenting start.

“It was so painful losing that match against Masvingo United as you know most goals conceded are blamed on goalkeepers.

But as God would have it, it’s time those memories get replaced by the league championship victory,” said Muchambo.

At the end of that season the airmen were to find themselves searching for another goalkeeper after losing veteran player-coach Innocent Chogugudza through retirement and 2006 was to see Zikeeper being plucked from his Mvuma base.

With no active football league in this Midlands ghost mining town then turning into commercial farming area it was a sure bet that Sibanda was a big gamble which could have backfired but alas the move paid dividends.

In the first home game against Highlanders at Ascot Stadium, Zikeeper sat out the entire match with Brighton taking up the position between the sticks on the 26 March 2006 losing 2-1, a match Ralph Matema got to the receiving end of Maxwell Dube’s ferocious free-kick.

On 7 May 2006, Brighton started against Motor Action at Ascot but an injury just before half time saw Sibanda being thrown onto the park and the jittery airmen lost 3-2.

In 2008, on 13 July just when the transfer window had just opened, Caps United visited Ascot and Zikeeper frustrated their attempts to wrestle the winning points and the Kepekepe officials didn’t hesitate to express their interest.
Within a week a move to Harare had been agreed.

“I had had my time at Chapungu but that move opened more avenues. I became part of the national team. Returning to Ascot and winning the championship medal added to the good memories,” said Sibanda.

With the league medal, Jorum and Sibanda join Malajila among the former Chapungu players that have celebrated the milestone of winning the league championship. Sunday News

The Green Machine 25 years after celebrating their Golden hour