Mighty Warriors off to Yaounde

Mighty warriors’ seasoned striker Rutendo Makore is convinced they will leave a mark at the Africa Women Cup of Nations starting this weekend in Cameroon. 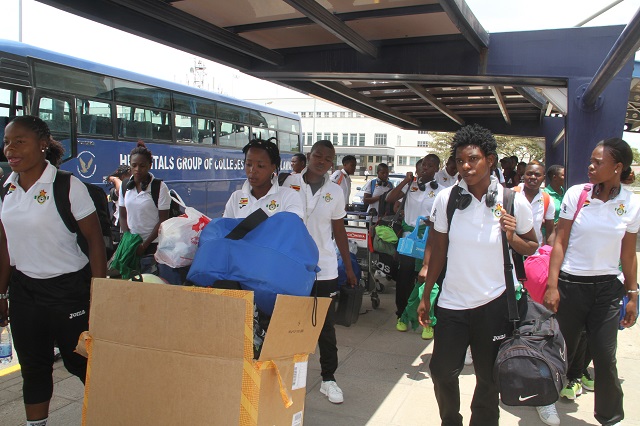 The senior women side left the country yesterday for the tournament which starts on Saturday and runs until December 3 in Yaounde and Limbe.

Zimbabwe will be in action against South Africa on the opening day of the competition. Interestingly, both teams were at the Olympic Games in Brazil last August representing the continent.

Speaking just before the team’s departure for Cameroon at the Harare International Airport, Makore, who was part of the Olympics side, said they will not be intimidated when they face South Africa, Egypt and Cameroon in Group A.

“I think all the teams are good, especially the Cameroon side. They are good and they are used to playing big teams but we are also the best. We were in Rio for the Olympics where we played Canada, Germany and Australia and the fact that we managed to score against them means something.

“So I think the experience will help us because we learnt a lot,” said Makore.

The 24-year-old said having been to a bigger stage than the Africa Cup of Nations such as the Olympics they are hoping for the best.

“What I can say is the tournament we are going for now is different from the one in Rio. I think the competition levels are also different this time around as we all stand equal chances.

“We have played South Africa before. We played them sometime back and at some point we used to beat them but the last two friendly games they have been beating us. However, I think we still have equal chances going into this tournament and they know it,” said Makore.

The team’s coach, Shadreck Mlauzi, said they are looking forward to the tournament.

“I think under the circumstances we have done the best we could as a team. So we now look forward to the tournament and see how it goes. Other than that, really we are happy with the manner in which the girls have responded to training,” Mlauzi said.

The Mighty Warriors gaffer pointed out that it is crucial that they do well in the opening encounter against Banyana Banyana on Saturday.

“We haven’t looked at the game at the National Sports Stadium in isolation, we have also reviewed the game that we played at Makhulong stadium in South Africa in May. So we have tried to work on the weaknesses and strengths as a team. So I think it should work out come Saturday,” said Mlauzi.

After Saturday’s clash with South Africa, Zimbabwe will then take on Egypt three days later and conclude the group games against Cameroon on November 25.

Zimbabwe will be making their fourth appearance at the tournament having competed in 2000 when they finished fourth.

The current crop of players will be hoping to write their own piece of history at the continental tournament despite facing challenges, including poor preparations, that have continued to be an obstacle in their efforts.

“Bosso not in panic mode”. . . No leadership crisis after Dube, Gumede suspensions