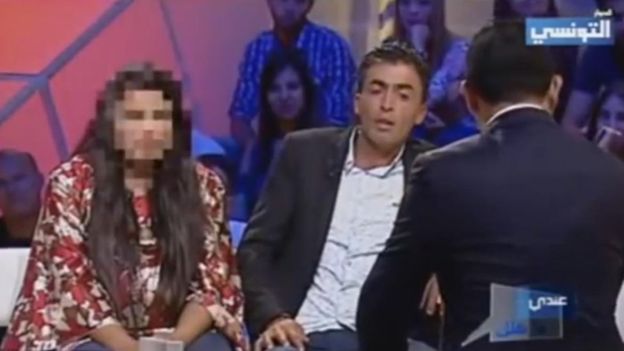 A popular Tunisian talk show has been suspended after its presenter appeared to tell a young female guest to marry the man she accuses of raping her, and suggested she was to blame.

The girl, named Hajar, said she had been sexually abused by three different members of her family since the age of 14.

Often crying, she also said she was eight months pregnant by one of her abusers.

It emerged during her appearance on Ala Chebbi’s show Andi Mankolek, or I’ve Got Something to Tell You, that poverty had forced her to give up school aged 14 to work on the family farm.

She also said that her father was frequently absent because of work, and that her relationship with him and her stepmother was poor.

Hajar’s elder brother, Allala, who appeared alongside her on the show earlier this month, said he had approached the show out of despair after her father, ashamed at her pregnancy, had kicked her out of the family home.

Although Tunisia is seen as relatively progressive on social matters among Muslim-majority countries, traditional attitudes are still widespread, and pregnancy before marriage is regarded by some as a matter of shame, regardless of the cause.

When Hajar’s father joined the programme, Chebbi suggested to him that “whoever did it should marry her to close the case” and “contain the situation”.

He asked Hajar who the father is, and she told him that she was not sure, but suspects the brother of her stepmother.

Told by her brother that all three alleged abusers were married, Chebbi added that “at least, he can recognise his child and give him his name”.

He then chided her for not reporting any of her abusers, and urged her to ask her father for forgiveness for being pregnant without being married. “Admit that you are at fault,” he added.

The remarks prompted an outcry on social media.

“Even though she was raped and abused by her relatives, he asks her to justify herself,” tweeted freelance cartoonist Tawfiq Omrane.

Thousands of people joined a Facebook page called “‘Marry your rapist,’ he says. ‘We will see you in court,’ we reply.”

The page uses a widely-shared photo of the show’s studio with a text overlaid that says: “Mr Ala: The punishment for rape is imprisonment, not marriage.”

It has addressed a letter to the minister for women, family and childhood, Samira Merai, calling for action to end violence against women and children.

There was alsocriticism of a law – Article 227 – that requires rape charges to be dropped if the perpetrator marries the victim.

The women’s ministry has drafted a bill to abolish the article, but this still needs to be ratified by parliament.

Chebbi insisted his remarks were taken out of context, telling Mosaique Radio FM he had only suggested marriage in light of what he called a lack of evidence proving that rape had taken place.

He said he believed the abusers should be punished if proven guilty of rape, but again reiterated his view that Hajar had made a mistake in remaining silent.

“This is the case of many Tunisian girls who have been raped and did not say anything,” he said. “Silence is the core of this case.”

But Tunisia’s media regulator has sided with his critics, suspending the programme for three months after finding it to have “violated human dignity”.

Radia Saidi, a spokeswoman of the Tunisian Independent High Authority for Audiovisual Communication, told the BBC’s Rana Jawad that Chebbi had judged the victim, rather than questioning her.”There was no excuse to break Tunisian laws and international laws for the protection of minors and of privacy,” she added. BBC News