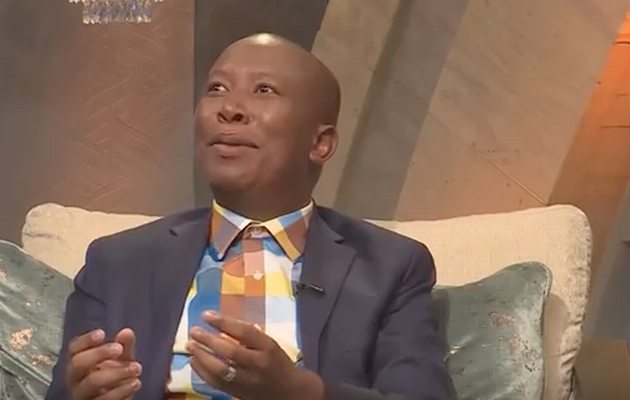 We bet you’ve never imagined Julius Malema proposing, never mind getting down on one knee to pop the question. He did both. But it didn’t go as you’d expect.

In his own words Julius Malema is a political animal. His private life, including his marriage, are topics that South Africans don’t know much about.

The red beret commander-in-chief has a really romantic side to him.

Speaking to Anele Mdoda on Real Talk, Julius opened up about his marriage with his wife, Mantwa, saying that she completes him.

He said it was a difficult decision to get married because of his granny.

“You are fighting to be Negros” – Malema…

“My grandmother used to say (she’s 87) ‘I will not die before you get married because I want to see the person who is going to take over from me.'”

Julius explained that it was a hard decision because he thought “because I want you to live long, I’m not going to get married”.

But he found love and detailed the moment he popped the question.

“We did have a discussion. We actually agreed, in principle, that we were going to get married.”

He took her to a location and had bought a ring.

“Then I take her to a place where I’m going to propose. Then I’ve got the ring. Eyi, that is the most scary part. I don’t want to repeat that thing. If I divorce, I don’t want it anymore.”

He said he was so nervous, he kept moving the ring.

“I keep moving the ring. And then. Eyi. It looks like she’s going to see it. Then I move it at the back of the belt. She says to me, ‘What is happening? It looks like you have a problem.’ I go ‘What problem? There is no problem.'”

It is then that he gets down on his knee.

“Now I go down to propose. Then she leaves me. I’m on my knee. She leaves me alone at the table. I go ‘come back. Come back.’

He says even though he knew they loved each other, like any other man getting ready to propose, nerves play havoc.

“I’ve tested waters. I know this person. But it’s that part: what if she says ‘no’.'” Sunday Times

“You are fighting to be Negros” – Malema slams South Africans…