The UN has warned it could take days for the full impact of Hurricane Matthew in Haiti to emerge, as the death toll soars to more than 800 dead.

The death toll has doubled, and may rise, as rescue teams gain access to remote areas cut off since the storm.

The World Food Programme’s Carlos Veloso says some areas in the south can only be reached by air or sea.

Many of the deaths in Haiti were in the south-western coast, which suffered the full force of the hurricane this week.

Category Three Matthew, with sustained winds of 120mph (193km/h), is currently battering the coastline of the US state of Florida but has not yet clear if it will make landfall.

At 11:00 local time (15:00 GMT) Matthew was hugging the Florida coast, about 35 miles east of Daytona Beach and moving north-west at about 13mph, the National Hurricane Center said.

Rescue efforts are under way to assess the destruction left in the wake of the most powerful Caribbean storm in a decade.

Haiti’s civil protection agency on Friday doubled the death toll from the hurricane from 400 to more than 800.

A definitive number is taking time to obtain because of the intensity of the damage to remote areas that are inaccessible because of flood water.

At least one major town in the south – Jeremie – has been 80% destroyed, with aerial footage showing the scale of destruction with hundreds of flattened houses. 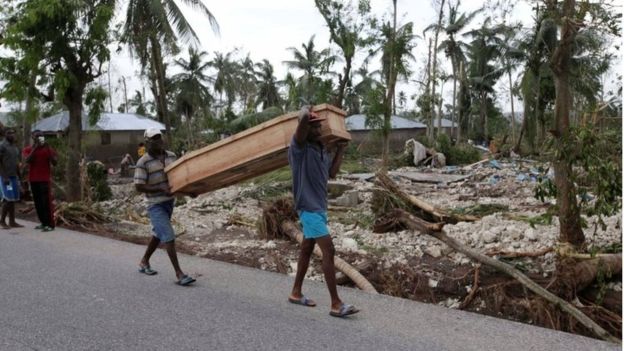 Three other towns in the south, according to Reuters news agency, are reporting dozens of fatalities. The mayor of the village of Chantal told the news agency that 86 people had died and 20 more were missing.

The UN says there are some 350,000 people in need of assistance.

“This is a situation changing all the time,” the World Food Programme’s Haiti director, Mr Veloso, said.

“I think that for the next four or five days, maybe only in five days, we will have a more clear picture of the impact and the death toll.”

The US is sending its USS Mesa Verde navy ship to help with rescue efforts.

Non-governmental organisations say communication with the areas worst affected has been hampered by lack of phone coverage and downed power lines.

There are also concerns about a surge in cholera cases, with the sanitation system in Haiti already overwhelmed.

Haiti – one of the world’s poorest countries – has never fully recovered from the earthquake that killed thousands of people in 2010 and the cholera epidemic that followed.

After slicing through Haiti and Cuba, Hurricane Matthew pounded the Bahamas on Thursday but no fatalities were reported there. Four people died in the neighbouring Dominican Republic on Tuesday.

The hurricane is currently winding its way up the south-eastern US coast, just kilometres from the Florida coast, which is being battered by strong winds and rain.

US President Barack Obama on Friday warned that, while southern Florida had been spared the worst, the hurricane remained very dangerous, and the risk of a storm surge and flooding remained real.

A state of emergency is in place in several states and at least three million inhabitants have been ordered to evacuate their homes.

More than half a million homes have lost power in Florida. BBC