The rich kids of Zimbabwe are showing off on Instagram: Sports cars, gold plated Italian sneakers and first class travel has become the lifestyle of the new elite in a country teetering on the brink of economic and political collapse.

Zimbabwe is second only to the Congo in the list of the poorest countries in the world, according to figures from the IMF.

The Heritage Foundation and Wall Street Journal identified Zimbabwe’s economy as one of the most repressed economies in Sub Saharan Africa and in the bottom five of the 2015 Index of Economic Freedom.

During the 1980s and early 1990s Zanu-PF promised a socialist redistribution of land and wealth to the majority rural population, who had been deprived of land and resources by the government of Ian Smith.

Despite indigenisation and black economic empowerment strategies, Zimbabwe is still one of the poorest and most expensive countries in the world. In Zimbabwean society there exists an elite of well-connected businessman and senior politicians.

This tiny minority has taken advantage of the new society they’ve built for themselves and reaped huge benefits.

Bentleys’ and Rolls Royces’ appear frequently in the capital, cruising down the pot-holed roads of Harare, passing hordes of informal traders who are barely able to a scrape a living on the streets.

The luxury golf estate of Borrowdale Brooke and Sam Levy’s Village are becoming a car spotters dream, rivalling London and Dubai’s rich spots. For a select few in Zimbabwe life is better than ever.

A prominent example is businessman Philip Chiyangwa and his 18 bedroom, 25 lounge mansion in Borrowdale which has made him a model of success for young Zimbabweans in the eyes of the Ministry of Information.

But most people cannot afford the lifestyle of Philip Chiyangwa and the elite. Another example is Sidney Hambira. He is the technical director of Sidal Engineering and has won a tender to maintain the water pipes for Harare City Council.

His sons Instagram profile, worthy of Rich Kids of Instagram, is littered with striking examples of rich’s opulent lifestyle; luxury fashion goods, VIP trips to Las Vegas and New York with bottles of Dom Perignon are routine for this international jet setter. 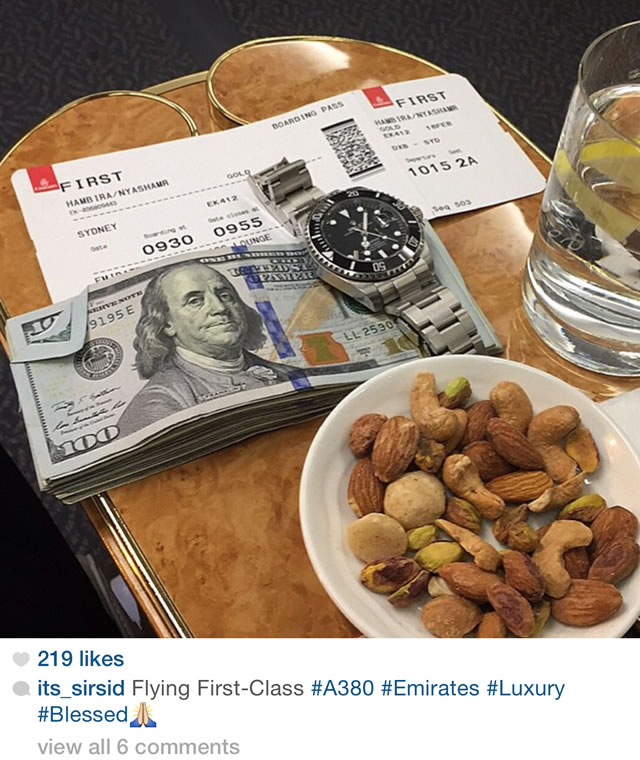 A first class Emirates ticket, a stack of $100 bills and a rolex watch. The contents worth of this picture alone is more than most Zimbabweans make in a life time.

His attitude reflects that of many rich play boys in Harare who are all becoming increasingly detached from the daunting reality of poverty facing many Zimbabweans.

The Zimbabwean government could barely afford to hold its own elections 2014 and is still struggling to pay civil servant salaries into the New Year.

Sidney on the other hand doesn’t seem to have any difficulty funding his playboy lifestyle.

The dreams of the younger generation of poor Zimbabweans are being warped by these scenes of over extravagance.

Sidney Hambira is just one of many children who belong to senior politicians and businessman languishing in the ethically dubious sums of money that pour in from “trading in the grey.”

The harrowing reality is many Zimbabweans have not been paid this year; Mbada Diamonds failed to paid its workers for months and several weeks ago disgruntled workers raided the Grain Marketing Board companies head office.

The cost of living in Zimbabwe is among the highest in the world and huge imbalances in income and costs, caused by hyperinflation, are still having an effect on families and businesses.

Phone bills in Zimbabwe are among the highest in Africa and borrowing money from commercial banks comes with a whopping 15 to 20 interest.

It is worrying that Sidney’s mind there is nothing wrong with brandishing his overpriced toys in a country as poor as Zimbabwe.

While much of the country’s youth are either jobless or cannot afford higher education. 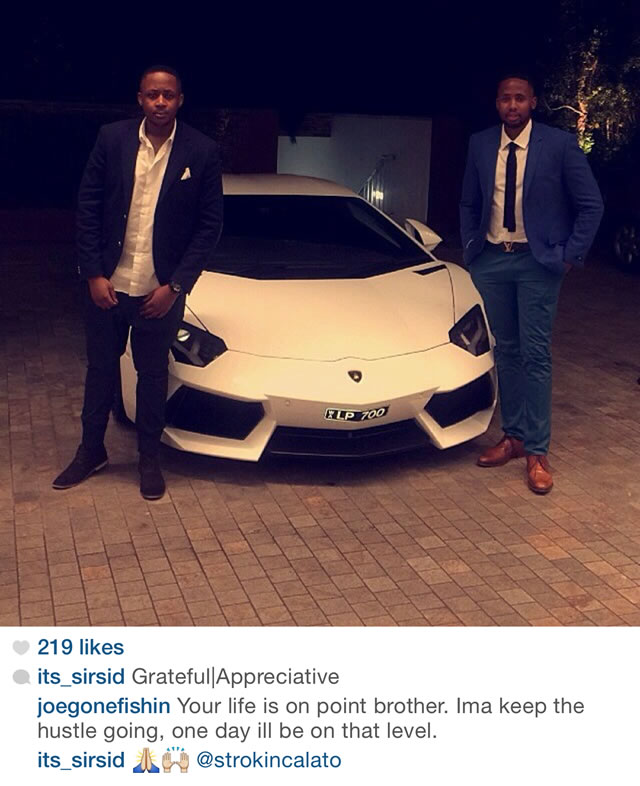 Hambira’s material lifestyle is the antithesis of what President Robert Mugabe and the war veterans fought for Zimbabwe’s liberation wanted to achieve.

The income level or GDP per capita in Zimbabwe is the joint second lowest in the world, at $600, level with Liberia.

Last year the Instagram accounts of rich individuals in Iran were removed after the government feared they would ferment public anger and backlash among opposition groups and activists in Tehran.

The reach of the Internet in Zimbabwe has greatly improved and over the past few years telecommunication companies have began offering data to thousands of people who can access the internet on their mobile phone.

How long before the people of Zimbabwe begin to protest against the growing inequality of income and the ludicrous scenes of money floating around cyberspace.

Bob Marley was a very popular and successful musician. He did not make a great deal of money throughout his career. He did however acquire a richness and wealth of a different kind.

He said that ‘the greatness of a man is not in how much wealth he acquires, but in his integrity and his ability to affect those around him positively.‘

The new generation of wealthy Zimbabwean’s should take heed of these words and accept their responsibility to be agents of positive change.

Politics is about Putin on a mask