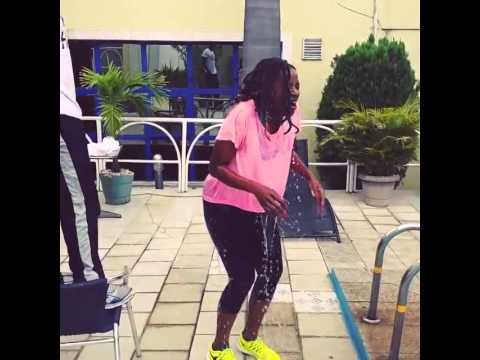 Zimbabwean TV presenter Makosi Musambasi has joined the “Ice Bucket Challenge” that has seen celebrities from across the world tipping ice water over themselves to raise awareness for various charities of their choice.

Many celebrities have risen to the challenge, and even President Obama has been asked, although he has yet to respond. Charities have reported a massive surge in donations after the campaign went viral, with celebrities such as Justin Timberlake and US talk show host Jimmy Fallon also getting in on the act.

In the UK, Macmillan Cancer Support is also using the Ice Bucket Challenge to raise awareness and donations. This week multi-billionaire Bill Gates dunked himself in ice water after being challenged by Facebook’s Mark Zuckerberg.

The Microsoft pioneer took the Ice Bucket Challenge to raise awareness for ALS, also known as Lou Gherig’s disease. The video – posted on his gatesnotes blog – shows Mr Gates watching Mr Zuckerberg nominate him and then rigging up an elaborate tipping mechanism to out-do the Facebook boss.

The challenge started in New Zealand on July 4, 2014, with a fundraising page on behalf of the Cancer Society to help support patients and their families through one of the toughest challenges anyone will face, a cancer diagnosis. As with similar challenges, it is usually filmed so footage can be shared online.

The challenge was popularized in the United States when Massachusetts resident and former Boston College baseball player Pete Frates, who has ALS, began posting about it on Twitter.

Within 24 hours of receiving a challenge, participants are to video record themselves in continuous footage. First, they are to announce their acceptance of the challenge followed by pouring ice into a bucket of water.