The struggle for democracy continues 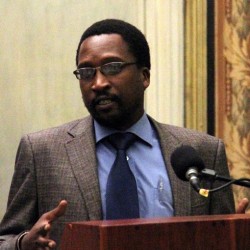 When the inclusive government came into existence, discourse over and about the “struggle” shifted significantly. Whether this discourse was about narratives of “arrival”, or alternatively, “continuity”, the conversations were always inconclusive.

In the aftermath of the July 31 2013 harmonised elections, questions that are now coming back to haunt or even re-focus many comrades relate to fundamentals. What is the struggle? Where is it placed? Has it come full circle? How does it continue (if it still exists)?

In saying the above, I am aware of the “judgment calls” that will be made on any assumed self righteous assessment of the state of affairs in the mainstream national political opposition. This is because the answers are in and of themselves judgment calls on those that were leading the struggle.

Mbeki remembering Mugabe: Nostalgia and talking back at…

A struggle which I remain persuaded exists and does not end with the 2013 electoral defeat of the MDCs (and components of civil society) by Zanu PF. This is because the struggle for a social democratic Zimbabwe has always been much more holistic and more important than all of the parties that were part of the July 31 electoral contest.

At this juncture, it becomes important that I define the “struggle”. Our post independence struggle has been a struggle for social democracy in Zimbabwe. It is a struggle that has its roots in the values of the liberation struggle wherein, social and economic justice was the key deliverable for a majority of the people of Zimbabwe (even if by default).

It is a struggle that celebrated the achievement of national independence and a joyous desire to participate in the return of our people to the making of Zimbabwean democratic, people centred and self-determining history.

Where we welcomed our first majority rule government, we remained cognisant of not only its challenges, but also its primary mandate which was to fulfil the aspirations of the liberation struggle. This was and remains a mandate of all subsequent post independence governments.

In our collective understanding of these matters, we measured Zanu PF (as the ruling party) on the basis of its ability to address and achieve the aspirations of our nation’s founding values and principles.

A decade after independence we were to find it necessary to challenge the political narrative of Zanu PF and the fundamentals of the manner in which it was governing the country. We were there both in spirit and form at the formation of the Zimbabwe Unity Movement and sought to challenge the ruling party’s hegemony.

We sought to initiate a narrative that the country did not belong to one party or specifically that the collective understanding of our national liberation was not singular.

Contrary to this view we recognised the posterity component of the struggle. One in which we knew and felt that the progenitors of the same said struggle knew and know that the “baton” will be carried forward by subsequent generations.

Unfortunately, this latter understanding of our national politics let alone of the significance of the liberation struggle did not find resonance in the ruling Zanu PF party. This was where and when it had disembarked from the revolutionary path and undertook elitist policies like Economic Structural Adjustment Programme (Esap) that negated the values of the liberation struggle.

We therefore, and correctly so, took to exercising our liberation struggle won rights of assembly, association and expression, to oppose the hegemony of Zanu PF.

This was done through not only opposing Esap via the Zimbabwe Congress of Trade unions (ZCTU), but also challenging the systematic narrative of political and human rights abuses stemming not only from our new found knowledge of the tragic events and state brutality that occurred in the Matabeleland regions in the early 1980s, but also the failure of the state to meet socio-economic performance legitimacy requirements.

We correctly began to question the meaning of the liberation struggle for the majority. We remained aware of the ineptitude of government but were even more significantly aware of the challenges and responsibilities of alternative national leadership.

That is why toward the 20th anniversary of our national independence the Movement for Democratic Change (MDC) was formed.

True to its founding intentions, the MDC went to the people and began the process of reclaiming the country from the elite and back to the masses. This is why, in the elections of the new millennium, the MDC was to gain ground in both parliament, as well as eventually end up as part of the executive branch of government with the assistance of the Sadc in 2009, only 10 years after its formation.

The reality of the matter is that the latitude that the MDCs had during their tenure in the inclusive government was intended to allow them to demonstrate their ability to not only govern, but to demonstrate greater commitment to the holistic aspirations of the liberation struggle. Both as envisioned in the past as well as in lived reality.

The above is a key point to explain, because, whereas it was and has been claimed that the mainstream opposition did not have any ideology, the truth is that its genesis was premised on the basis of social democracy.

Both in relation to its articles of Constitution, as well as in its political origins via the labour, womens’ and student movements. That the leaders of this counter-hegemonic project failed its own aspirations is an indictment of their ahistorical approach to it.

This point brings me to the particular issue of the struggle as I have defined above. It continues. It has to. Not because of individual egos or particular party aspirations. But more because this struggle for social democracy has and still belongs to the people of Zimbabwe.

Therefore, whether this generation of leaders genuinely and organically take it up or not, it shall certainly be taken up by subsequent ones.

Its new path however must be one that acknowledges past successes and failures, and one that specifically departs from celebrating cults and individuals, instead of principles, values and objectives.

Of heroes, anti-heroes and heroics heroics

Mbeki remembering Mugabe: Nostalgia and talking back at Blair