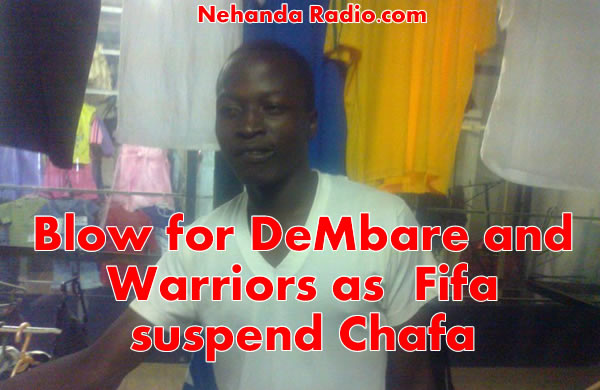 HARARE – World football governing body FIFA have provisionally suspended Dynamos and Warriors midfielder Devon Chafa for an initial period of 30 days and opened disciplinary proceedings against him after he allegedly tested positive for a prohibited substance.

As previously reported by Nehanda Radio, Chafa tested positive for a prohibited substance following a routine FIFA doping exercise during the 2014 World Cup football qualifier between Zimbabwe and Egypt played in Harare on the 9th of June 2013. Chafa claims the substance is linked to the medication he is taking.

A FIFA statement seen by Nehanda Radio said “the chairman of the FIFA Disciplinary Committee has provisionally suspended a Zimbabwean international footballer for an initial period of 30 days and opened disciplinary proceedings following an adverse analytical finding,” related to doping.

“After receiving the “A” sample result, which was positive for a prohibited substance included in WADA’s 2013 prohibited list, the player did not request the analysis of the “B” sample within the deadline granted,” FIFA said.

“The decision taken by the chairman of the FIFA Disciplinary Committee was duly notified to the Zimbabwe Football Association on 30 August. The player has until 9 September to inform FIFA whether he wishes to request a hearing.”

The FIFA statement which did not name the player went on to say “irrespective of whether or not the player requests a hearing, the player and/or the Zimbabwean Football Association have until 16 September to submit a statement and all related and supporting documentary evidence.”

According to FIFA rules they will not name the player, the anti-doping rule that has been violated, the prohibited substance and the consequences imposed until “after such hearing has been waived, or the assertion of an anti-doping rule violation has not been timely challenged.”

My love letter to the Zimbabwean Judiciary