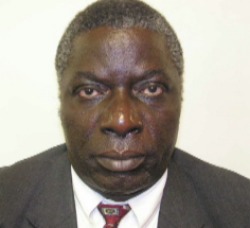 The MDC led by Morgan Tsvangirai on Monday boycotted the burial of one of Robert Mugabe’s top CIO officials, over the decision to grant him national ‘hero’ status.

Elias Kanengoni, the Deputy Director of the CIO and the head of the spy agency’s internal operations, collapsed and died at his home in Mashonaland Central last week. He was conferred with hero status not long after his death, and was buried at the national Heroes Acre on Monday.

But this decision, unilaterally made by the ZANU PF wing of government, has left the MDC-T fuming, because of Kanengoni’s conviction for the attempted murder of the late former Gweru mayor Patrick Kombayi.

MDC-T spokesperson Douglas Mwonzora has been quoted as saying that his party would not turn up for Monday’s funeral.

Mugabe is misleading the world on his party’s election…

The 9 heroes that divided Zimbabwe

Kanengoni was convicted of attempted murder in 1990 for the shooting and maiming of Kombayi. He was later pardoned by Mugabe despite being sentenced to seven years in prison.

Years later he was then named by the MDC-T as one of the people who orchestrated violent attacks that led to the deaths of 14 party activists killed in a single night in Chiweshe in May 2008. The MDC-T submitted a full list of the alleged perpetrators to the Attorney General and the Police Commissioner General Augustine Chihuri, but no arrests were ever made.

Political analyst Clifford Mashiri told SW Radio Africa Monday that the MDC-T decision to boycott the Kanengoni burial was a good one that reflected the anger felt by many in Zimbabwe.

“He is not a national hero and conferring him with such a status is an insult to Zimbabwe’s real heroes. Especially since he was confirmed in a court as an attempted murderer and was linked to orchestrating numerous MDC-T deaths,” Mashiri said.

He added that this was symptomatic of the larger problem of impunity in Zimbabwe, which ZANU PF has allowed to become an endemic problem.

“We can’t pretend we have national healing until we address impunity. We need a new government to investigate all these crimes, bring the perpetrators to book, and end this cycle we see,” Mashiri said.

Meanwhile it is being reported that the decision to grant the late CIO official with hero status has divided ZANU PF, with some members of the party reportedly fighting to stop the hero honour being conferred.

Kanengoni family sources told the NewsDay newspaper that the Dickson Mafios-led ZANU PF Mashonaland Central provincial leadership was determined to ensure that the top spy was not buried at the national shrine because of party factionalism. SW Radio Africa

Mugabe is misleading the world on his party’s election violence

The 9 heroes that divided Zimbabwe