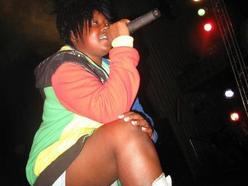 Zimbabwe dancehall music chanter Sandra Gazi a.k.a Lady Squanda is being accused of betraying the trust of several people in the United Kingdom including her own promoters who gave her mobile phones and other valuables to take back home.

Lady Squanda who recently toured the UK with Freeman and Jay C on the DangerZone Love and Unity Tour is however alleged to have shown no ‘love’ or ‘unity’ after allegedly diverting the phones, cosmetics and other groceries entrusted to her. A furious informer told Nehanda Radio:

“After being looked after properly when she was here. She was given a few items to take back to loved ones. She did not give the things to the rightful owners and sent messages of obscenities to the people that looked after her.”

One of the promoters, Osa Dangerzone confirmed to Nehanda Radio that he had entrusted two phones with Lady Squanda, one phone meant for his mother and the other for his father in law but Squanda initially claimed the phones had been seized by Zimbabwe customs.

Ironically Lady Squanda has a song called Ten Nought in which she boasts about stealing someone’s phone and how the victim cries about it. (‘Ndakamurova 10-0 akabuda musodzi”, she says in the song. She also openly says in the song ‘Squanda is very naughty’.

It was only after threats of further action that Squanda reluctantly released the phones but without the chargers, memory cards and manuals.

We have been told it took the intervention of her manager Hillary Mutake of Punchline Entertainment and Lady Squanda’s husband Deejay Stayera to resolve the issue over Osa’s phones. But other people who sent goods with her were not so lucky after she allegedly diverted them.

Squanda is being accused of converting to her own use, groceries and cosmetics meant for recipients in Zimbabwe. Clothes meant for a child who had a birthday on the Saturday that Squanda arrived on a Thursday, were allegedly diverted and the kid did not receive the presents sent by her mum.

On Monday evening a furious Lady Squanda spoke to Nehanda Radio and denied the accusations claiming she had given everything entrusted to her to the rightful owners. She claimed she was only given items by Osa and a lady called Leah and she had since given the intended recipients their ‘parcels’.

We also spoke to Deejay Stayera who defended his wife strongly. This is despite reports the couple fought over the issue with Stayera telling the complainants in the UK that his wife was keeping the phones in her bag and he did not know why she was not giving the rightful owners.

Nehanda Radio has been told those who sent goods with Squanda have since stopped asking for them because they were wasting more money on phone calls than what they spent on the items for their loved ones.

They were also having to put up with insults from Squanda. We were shown text messages in which Squanda was telling those asking for their things ‘muri matsaga, murikundiitira papazi.’ In another text she tells another victim ‘une dzungu.’

My childhood haunts me: Squanda