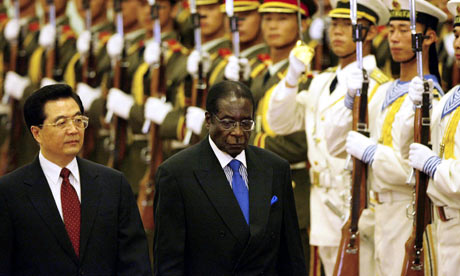 China has been granted “special mining rights” to mine some of Zimbabwe’s controversial uranium deposits by the winding up unity government, in exchange for the Asian giant building a nuclear power plant for electricity and providing military hardware.

The Zanu PF side of government, which has been using the MDC’s as a window dresser for it’s electoral and political legitmacy over the past four years, is also desperately mortgaging the country’s mineral wealth to Beijing in return for opaque economic loans, which the administration is finding difficult to repay thus piling up the responsibility on future generations.

Zimbabwe is targeting to make use of domestic nuclear energy by 2020, thereby necessitating the overtures with China, in which President Robert Mugabe and a coterie of his military strongmen are said to be interested parties, sources from the energy and power development ministry have said.

President Trump to pull US from Russia missile treaty

It is also coming to light for the first time that, Mugabe had initially sought nuclear technology, to boost the country’s electricity needs from Iran and North Korea in the 1990s, but his efforts did not bear fruit thus he turned to Argentina where he decided to acquire a nuclear reactor, and again his plans suffered a stillbirth.

Both Iran and North Korea have controversial nuclear programmes, which have set them on a collision course with the West due to the veil of secrecy shrouding them and fears by many intelligence organisations that the two rogue states are not pursuing peaceful nuclear programmes.

President Barack Obama, has warned the former is just over a year from possessing a nuclear bomb, while the latter has threatened Washington with a first nuclear strike option after being hit with a new regime of sanctions by the United Nations Security Council for her nuclear tests activities along the Korean Peninsula.

Pyongyang is also loathed in the country, for its notorious role in the training of 5th Brigade regiment forces charged with the sad massacres of Gukurahundi in Matabeleland in the 80s. China now appears, however to be the destination of last resort for Mugabe’s nuclear energy ambitions, which the ailing leader first mooted in the early days of his presidency.

Hard-line security chiefs widely believed to be the new power behind the curtain and also suspected of running a parallel government seem not to be leaving any stone unturned in the pillaging of minerals, from diamonds and now uranium to maintain political hegemony at Munhumutapa.

The green light given to China, makes it the second country after Iran which Harare has approved to tap into the mineral whose ore is also known as yellowcake, a powder that can be converted into uranium hexafluoride a key step of enrichment required to run a nuclear power plant or production of a nuclear bomb.

According to a report on the mining sector penciled in 2012 , believed to have been prepared for cabinet deliberations by mines minister Obert Mpofu, China will now have the rights to mine a slice of the uranium deposits found in the Kanyemba district, which is about 150 miles north of Harare.

Zimbabwe’s uranium deposits were first discovered by German prospectors in the 1980s but remained virgin due to low world prices, and inconclusive feasibility studies of the mineral.

“China has received the special rights to mine uranium and diamonds,which have become strategic national minerals,”reads part of the report. “They are considering to operate up to 60 percent of uranium claims in the Kanyemba area, and have indicated that they have technical capacity for the operations. Moves by the ministry to draft a law regime for miners to refine raw materials inside the country, presents the possibility of uranium processing inland for nuclear energy purposes in the not so distant future.”

Beijing’s planned foot-hold on the country’s uranium deposits has the blessing of securocrats who appear to have arm-twisted government into submission on the issue, and are determined to shape increasingly militarized foreign relations with China.

Harare initially had fears of a US-led military attack and a set of stringent sanctions from the EU, over its first secretive uranium deal with Iran reported in 2010, but fresh intelligence from seasoned State operatives indicates the risk is now minimal with China in the fold, our sources disclosed.

A Chinese firm, already registered in Zimbabwe, China Uranium Corporation (CUC) is said to be partnering with Zimbabwe’s Mining Development Corporation (ZMDC) on the project, although it is also not clear which other Chinese companies will take up the nuclear power plant plan if it receives the nod from cabinet.

The uranium mining project failed to take off earlier because the rights had not yet been awarded, although a deal had been sealed but busted after, British bank Standard Chartered cited EU and US sanctions against ZMDC thereby failing to facilitate the joint venture.

Deputy mines minister, Gift Chimanikire recently told Nehanda Radio China was welcome to resume uranium mining and the thrust was for the mineral to benefit local blacks according to the country’s contentious indigenisation laws.

“Yes China are welcome,” said Chimanikire. “Government is in fact planning to explore our uranium reserves at a massive scale, through partnering foreign investors and the private sector, but the indigenisation law of 51 percent ownership by local Zimbabweans must be observed. Chinese companies together with other investors can help us to determine the quantity and commercial value of the uranium, but the country must benefit from it.”

Zimbabwe’s power utility chief executive officer, Josh Chifamba, could have lifted the lid on the nuclear power plant plans with China, last year when he all but confirmed to executives during an International Conference in Bulawayo that the country would be using nuclear energy by 2020.

“There is no reason why a country with untapped uranium deposits continues to have chronic electricity shortages. We have four power options at the moment. One of it involves nuclear power,” said Chifamba.

However Chifamba’s boss, energy minister Elton Mangoma made a sharp contradiction telling us that the nuclear option was not on the radar but:

“That we are looking at regional power cooperation, because it is cheaper and safer.” Mangoma could neither confirm nor deny overtures made by Mugabe to China for the construction of a nuclear plant facility.

Tsvangirai has no role in by-elections

President Trump to pull US from Russia missile treaty