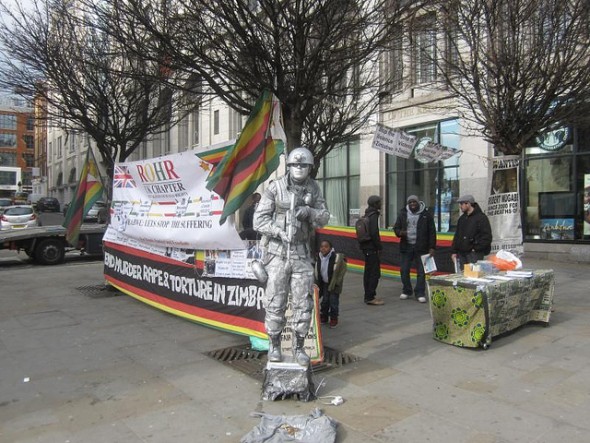 LONDON – Britain’s conciliatory overture to Zanu PF was rudely rejected by Justice Minister Chinamasa on his visit to London for talks with the international donor group known as the Friends of Zimbabwe.

People were stunned when Chinamasa lunged at Kate Hoey, Chair of the All-Party Parliamentary Committee on Zimbabwe, at a Foreign Office reception on Monday for the visiting ministerial delegation.

The blustering bully had to be restrained by Zimbabwean Ambassador Machinga, who apologised profusely to the British MP. ‘Entirely in keeping with what I would expect from Zanu PF’, said Hoey.

If donor countries thought that by lifting most sanctions (including the exclusion of Chinamasa) it would be reciprocated by Zanu PF concessions their illusions were dispelled by Chinamasa’s intransigence.

Despite the Friends of Zimbabwe donating $2.6 billion to Zimbabwe in the last four years they are still the enemy, as Chinamasa made clear in a communique after the talks on Tuesday.

He said there was nothing to show for this aid ‘in terms of development at grass roots level except high rise and expensive houses for staff of the NGOS’ and insisted the aid should go direct to the government.

He said the donors in any case would not be allowed to observe the elections as they were not ‘objective’ and that there would be no security sector reforms as this would just be a means of ‘effecting regime change’.

Chinamasa added that the international community must understand that SADC’s role was just to facilitate and not supervise or impose a solution in Zimbabwe and that foreign radio broadcasts to Zimbabwe must be stopped.

Not many concessions there – not that the Vigil expected anything but North Korean-type paranoia. Our supporters, gathered outside the Tuesday meeting in the bitter cold, shouted ‘thief’ and ‘murderer’ when Chinamasa emerged from the talks.

Thanks to the valiant Vigil activists who gathered at short notice for the demonstration.

They were: Cephas Moswoswa, Ishmael Makina, David Takundwa, Kelvin Kamupira, Peter Sidindi, Jonathan Kariwoh and Rose Benton. Behind the Vigil banner reading’ End Murder, Rape and Torture in Zimbabwe’ they displayed posters such as: ‘Britain don’t give in to Mugabe’, ‘No money unless rule of law’, ‘International observers for free and fair elections’, ‘EU bought by diamonds’, and ‘Restore rule of law in Zimbabwe’.

We took photos of a suspected CIO agent who was photographing us. He didn’t like it. Present at the talks was Wayne Ives, Head of the Foreign Office’s Zimbabwe Desk, who suggested a meeting to discuss our concerns, which we welcome.

The Friends of Zimbabwe in their communique on the talks insisted on the implementation of the GPA reforms ahead of elections and said a wide range of international observers would enhance the credibility of the poll.

One of the Vigil founders, Patson Muzuwa, managed to smuggle himself into the Zimbabwe Embassy for a meeting on Friday attended by the three person Zimbabwe delegation representing the GNU partners.

Patson said that by allowing Chinamasa into the country the UK had done us a favour: the whole world would now see at first-hand what a bigoted thug he is. Patson said it was clear that the delegation only wanted to meet selected members of the diaspora and people had tried to shut him up when he insisted on asking questions.

When Chinamasa asked whether people had been ill-treated by Zanu PF, Patson dismayed everyone by standing up and saying ‘Yes, I have been tortured’. Patson added that Chinamasa made racist remarks, saying Zimbabweans didn’t want whites, and also made it clear that he didn’t want Zimbabweans returning home.

It was another bitterly cold Vigil with flurries of snow but we were protected against Chinamasa by a silver soldier: a ‘living statue’ performance artist, standing immobile covered in silver paint.

It was good to be joined by so many of our own old soldiers. Apart from Patson, they included: Tawanda Spicer, Moses Kandiyawo, Bee Tapa and Lovemore Mukeyani.

For latest Vigil pictures check: http://www.flickr.com/photos/zimbabwevigil/. Please note: Vigil photos can only be downloaded from our Flickr website – they cannot be downloaded from the slideshow on the front page of the Zimvigil website.

FOR THE RECORD: 41 signed the register.

The Vigil, outside the Zimbabwe Embassy, 429 Strand, London, takes place every Saturday from 14.00 to 18.00 to protest against gross violations of human rights in Zimbabwe. The Vigil which started in October 2002 will continue until internationally-monitored, free and fair elections are held in Zimbabwe. http://www.zimvigil.co.uk.