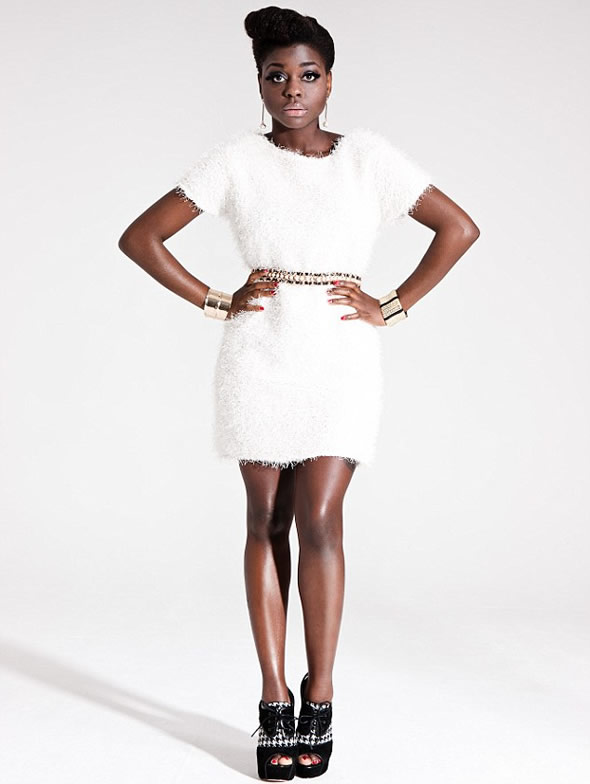 Gamu Nhengu shot to fame on the X Factor but had a tumultuous journey after she was rejected by Cheryl Cole and then faced legal action and threatened deportation by the British government.

However the Zimbabwe born singer has overcome her troubles and is now ready to progress with a music career, finally. The stunning singer was the subject of much controversy when X Factor judge Cole chose not to send her through to the live shows, despite a brilliant judges houses performance.

Nhengu was an early favourite to win the entire series and many viewers were angry that Katie Waissel and Cher Lloyd progressed, despite both messing up their last audition. Around 1,000 people complained to ITV and around 220,000 joined a Facebook page called “Gamu Should Have Got Through”.

Cheryl even received death threats over her decision. Let’s hope all those people come out now to support Gamu, as she has unveiled her first single this week and revealed that it’s a track called ‘Shake The Room.’

The tune is 60s inspired but with a contemporary twist and serves as Nhengu’s first official solo single from her debut album ‘A Love Like This.’

She has been working on the record for a year and revealed that she has tweaked and reworked much of it’s content, because she wanted her first offering to be a album she could be proud of.

She told The Daily Mail: ‘I wanted to make something that would last, something timeless, classic and classy – like a Chanel suit.

‘It was all about what direction I wanted to take, about trying to find who I was. Most of the songs are about love, because I wanted to sing about what I knew. I wanted things I could relate to: being in love, and heartbreak. The same things any young person will write about, really.’

Gamu revealed that the media storm which followed her after being dropped from The X Factor was almost too much for her to cope with.

As well as dealing with her mum’s legal issues and fight to stay in Scotland, she was being bombarded with offers from many people and firms promising to make her very rich, very quickly. She wanted to take some time to weigh up her options and revealed:

‘It was all overwhelming. I couldn’t go to get my eyebrows done without someone chasing me down the street and offering me a record deal, or saying they could do this thing or that thing for me.

‘But though I was very flattered that people were interested, I needed to feel comfortable, like I wasn’t selling myself short. So I waited for the right thing.’

Today many of Gamu’s fans have been raving about her new tune, including a few famous faces. Charlie Condou from Coronation Street tweeted about the song, saying: “Ive just seen the video for @Gamuofficial’s new song. Its amazing! (Im still not over her leaving X Factor)” UnrealityTV.co.uk

Watch the video for yourself and tell us what you think in the comments section below.

An urgent letter to God: From a Zimbabwean