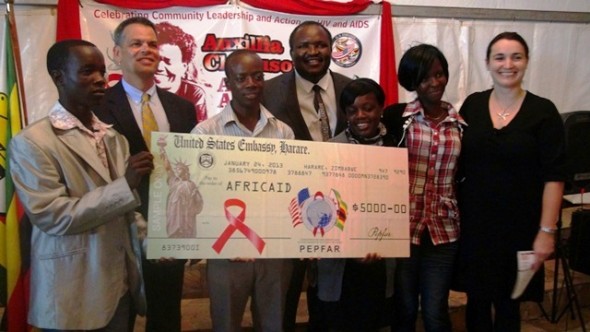 HARARE – The United States and Zimbabwe are investing in and focusing on youth to continue the fight against HIV/AIDS stigma and discrimination and have provided resources to a youth-focused organization to expand its outreach.

“Stigma and discrimination continue to prevent some people from accessing readily available HIV and AIDS support services. Especially among the large, important youth population, there are gaps in knowledge and great stigma to overcome,” said Bruce Wharton, United States ambassador to Zimbabwe, as he awarded a US$5000 grant to Africaid last Thursday on behalf of the President’s Emergency Fund for AIDS Relief (PEPFAR).

Africaid was named the winner of the 2012 Auxillia Chimusoro HIV and AIDS Alumni Award ceremony held in Harare last Thursday.

The ceremony was attended by senior government officials including Henry Madzorera, the Minister of Health and Child Welfare, who delivered remarks about the strong U.S.-Zimbabwe partnership in addressing HIV/AIDS issues, as well as AIDS service organizations, and international organizations.

As this program recognized programming that supports the national response to HIV/AIDS, the Ambassador recognized the appropriateness of last December’s World AIDS Day theme, “Getting to Zero – My Responsibility, Your Responsibility.”

Africaid director Nicola Willis said her organization, which works with HIV positive youth, will use the grant to support a musical DVD production by HIV positive children and adolescents, supported by national artists.

The production is provisionally titled “Make us the last generation to be born with HIV” and is a continuation of Africaid’s innovative “Zvandiri” model which provides community-based treatment, care, support and prevention services for HIV positive children and adolescents.

“I am particularly impressed that, ultimately, you want these young men and women to be the “last generation to be born with HIV,” said the U.S. Ambassador, whose country has provided over $390 million in towards Zimbabwe’s response to HIV/AIDS since 2005.

“That is a noble cause – and as science tells us, is a realistic one. But we have to continue to work together.”

This year alone, the U.S. pledged $95 million to the national HIV/AIDS response in Zimbabwe through the President’s Emergency Plan for AIDS Relief (PEPFAR) to support critical health interventions designed to prevent more HIV infections; to scale-up combination prevention initiatives; to assist those orphaned by HIV and other vulnerable children; and to strengthen the Zimbabwean health system.

According to recent estimates from UNAIDS, nearly 150,000 children are living with HIV in Zimbabwe and an estimated 8,000 were newly infected in by the end of 2011 with the vast majority of them through mother to child transmission.

To highlight the importance of youth-focused activities and outreach to often overlook populations, the event organizers invited the Royal B-Boy hip-hop crew of Mbare to perform at the event.

The crew won the Jibilika Dance Trust World AIDS Day Festival last year (December 1, Harare Gardens) with their expressive dance response to HIV/AIDS in their lives. Recognizing their potential as role models in their community of mostly unemployed and out of school youth, the crew aims to represent positive behavior choices.

Traditionally, the Chimusoro awards are based on nominations from the public. However, the 2012 awards asked that alumni (over 40 former award winners over roughly a dozen years) submit proposals detailing how they would spend a single $5,000 award.

14 submitted proposals that were adjudicated by a panel of judges including representatives from USAID, the National AIDS Council, the Centers for Disease Control/Zimbabwe, and the Public Affairs Section.

The eventual winner, Africaid, was a 2011 award winner.

The awards are named after Auxillia Chimusoro, the first person in Zimbabwe to publicly disclose her HIV positive status in 1989 at a time when stigma and discrimination was common.

She founded the Batanai HIV/AIDS Support Group in 1992 and was one of the founders of the Zimbabwe National Network of People Living with HIV/AIDS. She also worked with several support groups before her death in June 1998- ZimPAS©

What they said about John Makumbe