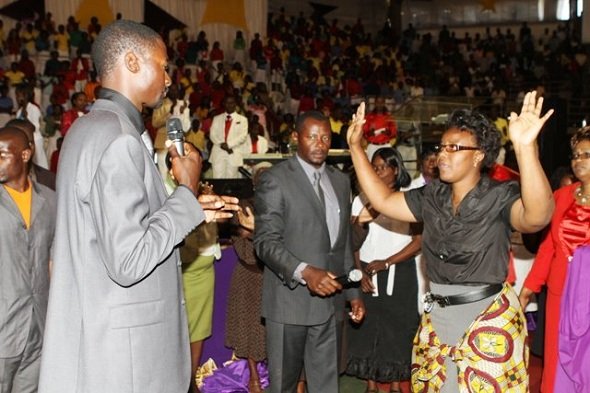 Gold and diamonds at Makandiwa service

Some turned escatic after they found themselves clutching pieces of gold and diamonds in their hands during a church service conducted at City Sports Centre in Harare yesterday.

Earlier on, Makandiwa had warned the congregation to brace for the miracles and later declared that people with disabilities would be healed, bald heads fitted with hair with others developing new teeth.

He then read from the Book of Jeremiah 33v3 which reads: “Call unto me, and I will answer thee, and show thee great and mighty things, which thou knowest not.”

Makandiwa declared that the miracles were meant for people who doubted his ability to perform supernatural wonders.

“This is the new dispensation that God has ushered us into, everything was made by his creative power and the same God is in this place today,” he said.

“Legs will grow, teeth will come out, some with extra fat will instantly lose weight, those bald heads will receive hair, and some of you will find gold at your houses.

“I see some people going on for months with their groceries resurfacing and some fuel gauges increasing while you drive,” Makandiwa declared

He also said others would criticise these miracles and their significance “but what good is a miracle when you are used to it?

“Why did Jesus Christ walk on water when he could use the available boats?

“Why turn fish and bread into thousands while the disciple could go and buy food?

“These are not miracles, they are signs and wonders. God does them to prove a point,” he added.

Soon after, a woman who had back pain and uneven legs was immediately called to the podium and she was prayed for with instant visual changes of her left leg stretching up to the size of her right leg.

The congregation then went ecstatic with spontaneous miracles happening with some receiving gold and diamond pieces in their hands. Makandiwa said the incident was going to generate heated debate among non-believers, but said he would not be moved by criticisms. NewsDay