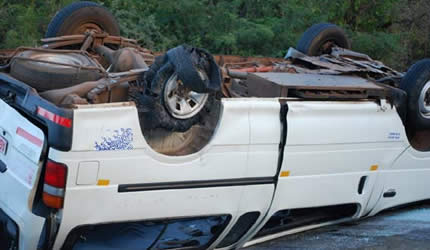 The number of people killed in road accidents since the beginning of the festive season has risen to 134, while 736 others have been injured in 795 accidents recorded so far.

This is almost double the 72 people who perished during the same period last year with 799 others injured in 555 accidents. So far, police say they have impounded 762 vehicles for defects.

In one of the worst accidents, six members of the same family were killed when a commuter omnibus veered off the road and overturned several times in Chivhu on Monday night.

“We have so far issued a total of 10 056 tickets to motorists for violating traffic offences,” Supt Nyathi said.

He said Manicaland recorded the highest number of deaths with 28, Mashonaland East 24, Masvingo 21, Matabeleland North 18, Matabeleland South 13 while Harare and the Midlands recorded 10 deaths each.

Supt Nyathi said eight people, including six family members, were killed while 14 others were injured when a commuter omnibus veered off the road and overturned several times in Chivhu on Monday night. He said the accident occurred along the Kadhani and Mubaira roads.

“The commuter omnibus was carrying 22 passengers when the accident occurred. Six people died on the spot while the other two died on admission at St Michael’s Hospital.

“Public Service vehicles should also stick to their road permits and avoid overloading.”

The police spokesman said members of the force would remain deployed on the country’s major roads to ensure there is sanity. A total of 147 people were killed last year while 1 304 others were injured during the festive season.

From January to October this year, 28 929 accidents were recorded as compared to 26 500 recorded during the same period last year. Herald