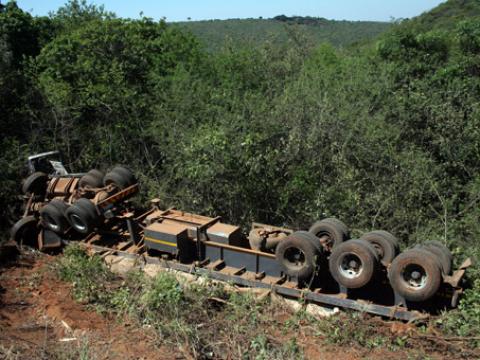 About 18 people were killed and 46 others were injured when a lorry veered off the road and overturned at the 18km peg at the Selbourne Hauna road, near Mutare.

Police Spokesperson for Manicaland Province, Inspector Enock Chishiri, said the driver of the lorry lost control of the vehicle, which then overturned several times killing some of the 63 green produce farmers who were on board.

Meanwhile, one person died while 19 others sustained injuries this Saturday when a bus they were travelling in overturned at Rainfield near Lionsden. Officer Commanding Crime Makonde District Superintendent Simangaliso Dube said the driver of the bus lost control of the bus resulting in it overturning.

He said one person died on arrival at Chinhoyi hospital while 19 were treated for minor injuries and discharged. The bus was destined for Zvipani in Hurungwe.

Government has declared the Hauna accident in Manicaland Province which claimed 18 lives on Sunday a national disaster. Local Government, Rural and Urban Development Minister, Ignatious Chombo says all relatives of the people who died in in the accident will receive state assistance.

Dr Chombo said government will provide coffins, food and money to assist all the families who lost their beloved ones. He urged drivers to exercise extreme caution especially during the festive season when people will be travelling in their numbers to rural areas.

Meanwhile long queues of buses ferrying people to their respective destinations was the order of the day at Mbare Musika.

Beware of fraudsters this festive season