Adam Ndlovu and the reason for good citizenry 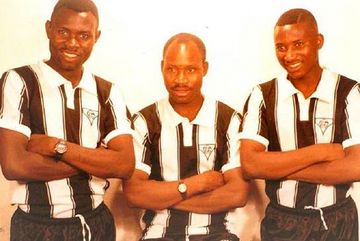 A letter from the baTonga

Kufwa nkoona (death is slumber), where the current maze has a political direction and little to less of development inclination, obviously fattened by an  impending 2013 election and the atavistically resident culture of greed, one finds it difficult to predict growth potentials of certain communities, certain societies and obviously, the direction of states or our state.

As I force this article to have an obituary sense, there is a growing urge bent on information away from the typical obituary of weeping and requiems.

Factionalism: Dirtying youths with sins of our fathers

Zanu PF factional strife: An example of ‘Killing in the name…

MDC @15: Summing it all before bedtime

In my community, the adage, kufwa nkoona is a constant reminder of man’s predestined station. That man is mortal is knowledge that is free for all.

The adage ‘s tutorial essence teaches that once death comes, a person is always remembered in good faith and his name should be the light that directs and redirects people into good paths.

Adam has been a brother and of course a epitome of inspiration to a lot more. He has been a reason for self perpetuation and defiance to  modern day debacles that even stretch to the formidable stereotypical glares.

One of Obert Gutu’s articles has gone with a prelude that sought to equally rekindle man’s otherwise supine eye of conscience. An eye that sees  far not frustrated by myopic yokes. When I die, (it went) I want to  be remembered as a person who has done such and such a thing.

Personally, I think that should form not only a fortified dream of Gutu’s protagonist character in his article, but it should be consolidated as a fundamental tapestry of human nature.

I also wish to be remembered as a person who has helped people out of the bondages and jokes of African euphemism, as a humanitarian that has bailed  people from the  grinding poverty and colonial sequels, a person that helps the poor and dusts them off to respected social entities.

There is no redemptive song that reactivates a soul out of eternal slumber, not even mellifluous melodies from Tonga horns and flutes or nyele as we call them in my village.

I might not be sufficiently qualified to render such a superlative posthumous rendition, but fostered by the mandate for civil service and the exalted propensity to the recognition of minority groups, where apparently I, together with Adam came from, has a denigrating infliction that has for three decades, of course since Zimbabwe’s 1980 independence , caused a social flare.

I wish to be called a civil servant, even as I cannot hoist a Salary Services Bureau (SSB) paycheck at call, but from the deep entrenched will for socialism.

I am proud to be born out of a society that winks at political tyranny with scorn. A society that assumes a radical political exemption for social concerns. A society where heroism is a mandatory community doctrine.

Adam is here celebrated obviously as a selfless cadre in the sporting fraternity, to me as a technocratic development practitioner who used sport, which apart from being popularly known for its athleticism and physical dexterity, is another development factor which unfortunately, in my country, is still docked in the country’s ‘terra incognito’ and ‘Virgin Islands’.

Yet with evident high unemployment rates and an irking economy, Zimbabwe still battles in search of a basic formula for poverty eradication, for employment creation, although an ignorant eye to the vital sector- applied scholastics and sports, we cast. On the other hand, countries like Botswana have made strides through sports.

As we mourn, let us remember the amount of task Adam Ndlovu had shouldered, let us remember his social impact and responsibility. It is sports and oblique sectors that directly helps in the redemption of vulnerable people out of misery.

This is a philosophical ideology shared by the United National through its United Nations Office on Sports for Development and Peace (UNOSDP).  The UN General Assembly has since passed a resolution on sport, reaffirming the use of sport to bring about positive social change.

This year’s resolution entitled Sport as a means to promote  education, health, development and peace “encourages the use sport as a vehicle to foster  development  and strengthen education , prevent diseases, empower girls and women and facilitate conflict prevention and peace building.

I certainly could not have stood up to count myself as a social writer without this literary offering. I prefer to say, Adamski will not find a match.

I need people who could stand bold and say, “when I die, remember me as a person of will and zeal, a civil servant whose services is not besmirched by the mundane greed for mediocrity and short-lived renown “. Minds that do not shy away from self interrogation and nature insinuated inquests, but boldly ask” will I also die?”

For a small community that still yearn for recognition, a community often omitted from national inclusion and left to battle on its solitary means, this is a great loss. The baTonga mourn.   Allow me to say, with all due respect, Adam Ndlovu is a national hero, Twaswekelwa.

Zisunko Ndlovu is a development projects Monitor and an accredited journalist from Binga. He can be contacted at [email protected]

Factionalism: Dirtying youths with sins of our fathers

Zanu PF factional strife: An example of ‘Killing in the name of God’

MDC @15: Summing it all before bedtime