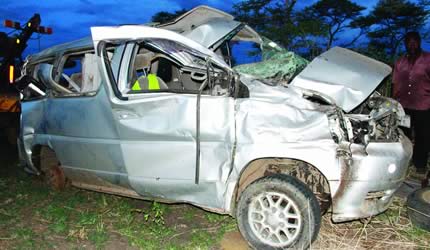 Ten band members of the popular music group Utakataka Express were involved in an accident about 10km outside Kadoma on the Harare-Bulawayo Road as they were returning from Gokwe where they had performed at the Unity Gala.

The group is fronted by Peter Moyo, the son of the late Tongai Moyo who arrived in Harare safely with other band members as they were using separate vehicles.

Information gathered last night indicates that about two band members who were in critical condition were rushed to Harare Central Hospital while the others were taken to Kwekwe Hospital.

The group performed at Hwenje’s Village in Glen Norah, Harare, on Friday night before proceeding to the Unity Gala. They were scheduled to perform in Chitungwiza yesterday afternoon after which they would stage another show in Bindura.

An eyewitness — who could not be immediately identified said: “The vehicle burst its rear left tyre and veered off the road. It then uprooted a tree before hitting a roadside pole. It subsequently overturned.”

A Sunday Mail crew which covered the musical gala arrived at Kadoma General Hospital as arrangements were being made to transfer some of the musicians to Harare and others to Kwekwe.