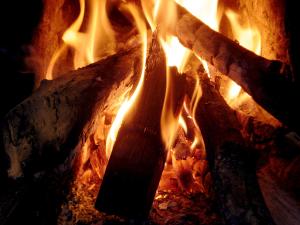 A 46-year-old adulterous Sanyati woman died recently after being sprinkled with petrol and set ablaze by a neighbour she had dumped for a younger lover. The lover went on to hang himself with a shirt in his cell at Sanyati police station.

Mary Dlamini of Lutuli Village under Chief Neuso reportedly informed Gesham Mapete (35) that she wanted out of the adulterous affair as she had found another potent and younger lover.

This did not go down well with Mapete who suspected that he could have contracted a disease during the subsistence of the affair. Dlamini (46) died in the resultant inferno on Saturday night at around 8pm.

Mashonaland West police spokesperson Inspector Clemence Mabgweazara confirmed the incident adding that Mapete who fled the scene soon after realising that Dlamini was on fire handed himself to Sanyati police station the following morning.

“We are investigating a matter in which a man set a woman on fire before going on the run for a few hours and later handing himself over to the police,” he said.

On the fateful night, Mapete who was holding a five-litre container of petrol went to Dlamini’s house which is about 50 metres away and found her husband Jotham Choga (30) outside. He asked to see Dlamini and Choga who did not suspect anything told him she was in the kitchen.

Mapete entered the kitchen and sprinkled petrol all over Dlamini before running out of the house fearing that she would catch fire while he was still inside. Dlamini also ran out of the house but upon realising that she had not caught fire, Mapete lit a matchstick and threw it at the woman setting her ablaze.

“She followed him outside and Mapete then lit a matchstick and set Dlamini on fire before fleeing to his house,” said Insp Mabgweazara. He said Dlamini, who was now engulfed in flames, ran after Mapete but fell on the ground and died on reaching his bedroom.

The husband phoned the police in Sanyati who attended the scene and guarded the body before it was taken to Kadoma General Hospital for post-mortem. Insp Mabgweazara said after realising what he had done Mapete handed himself over to the police.

“However, he hanged himself with a shirt in the cells on Monday night,” he said.

Inspector Mabgweazara warned people against taking the law into their own hands. He said the incident was unfortunate coming as it did as the nation was observing 16 Days of Activism Against Gender-based Violence.