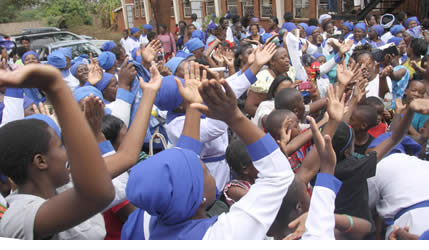 The Anglican Church of the Province of Zimbabwe, led by Archbishop Nolbert Kunonga, is seeking to reclaim control over the church properties it held since 2007.

Mr Samukange has since filed an urgent chamber application to stay execution of the eviction order. He has also issued summons before the same court seeking an order declaring the ACPZ the legitimate owners of the church properties, including the Anglican Cathedral in Harare.

Judge President George Chiweshe is expected to hear the urgent chamber application today. Mr Samukange took over from Chikumbirike and Associates who have handled the case since 2007.

The Supreme Court last week ruled that the Church of the Province of Central Africa represented by Bishop Chad Gandiya was the legitimate owner of the property that has been under the control of Archbishop Kunonga’s church since 2007.

The CPCA obtained a writ of execution that empowered the deputy sheriff to eject Archbishop Kunonga and 10 others from the cathedral offices, Paget House along Kwame Nkrumah and from number 101 Central Avenue in Harare.

The Registrar of the High Court issued a writ of delivery that compels Archbishop Kunonga and 10 others to surrender the church properties in their possession. The property in question includes a Toyota Fortuner, Toyota Hilux single cab, a Mazda 626 and any other items belonging to the CPCA.

The two court proceedings were instituted on the basis that ACPZ was never part of the proceedings that gave rise to the recent Supreme Court judgment. Archbishop Kunonga, according to the court papers, was a separate legal entity from the ACPZ.

To this end, he argued that the outcome of the Supreme Court case had no bearing on the church. In the summons issued yesterday, ACPZ contends that the Bishop Chad Gandiya-led Church of the Province of Central Africa’s Diocese of Harare had no right to control the churches, schools and colleges.

“Plaintiff is entitled to claim ownership of the church, schools, colleges and other properties as this forms part of the natural resources of the Zimbabwean community just like land and minerals.

“They cannot be owned by a foreign entity. Plaintiff cannot claim ownership of the same property in a foreign land such as the United Kingdom, so must the defendant,” reads the plaintiff’s declaration. In the urgent chamber application, Archbishop Kunonga deposed an affidavit as the head of the ACPZ.

He stated that his church was not part of the court proceedings that declared CPCA the owner of the property, arguing that the court applications cited him as a bishop and not the Anglican Church of the Province of Zimbabwe.

“I must point out that the applicant (Anglican Church of the Province of Zimbabwe) was formed in 2007 and remained in possession of the various properties which second respondent (Deputy Sheriff) intends to remove us from.

“The applicant was not part of the proceedings in case number HC6544/07 or in the SC180/09 or any other proceedings both in the High Court and the Supreme Court.

“The applicant has a right to be heard and to protect its interests. “Applicant will suffer irreparable harm if its interests are not properly ventilated in an open court,” read part of Archbishop Kunonga’s affidavit.

In a certificate of urgency by Mr Tawanda Kanengoni of Munangati and Associates, it was indicated that 150 priests of Archbishop Kunonga’s church risk being evicted if the High Court fails to intervene.

Mr Kanengoni stated that the CPCA members would not suffer any harm if the application was granted because for the past five years they had been worshipping from other places.

Anglican clergy and parishioners who went back to worship in church buildings that had been seized by Kunonga, have said for the most part parishes were peaceful but they faced resistance in some areas.

Kunonga’s followers are also alleged to have poisoned a mango orchard at St Paul’s Church in Chinhoyi, in what is believed to have been an act of revenge against clergy and worshippers in the main Anglican church.

The process of taking back the church buildings went peacefully in most parishes, following last week’s Supreme Court ruling ordering Kunonga’s faction to return all seized properties to the official Anglican church. The court also acknowledged Bishop Chad Gandiya as the Bishop of Harare.

Peaceful services were held in many parishes, including Avondale, Cranborne, Mabelreign, Mufakose, Budiriro and Norton, where church services were conducted midweek after Kunonga’s bishops and priests moved out.

But strong resistance was reported at three of Kunonga’s parishes on Friday, including St Philip parish in Tafara and St James parish in Mabvuku, where Reverend Raymond Makiwa is alleged to have threatened to unleash dogs on anyone trying to evict him.

Also resisting are Morris Brown Gwendenge and his wife Portia at St Philips Parish in Guruve. It is believed that Kunonga is directing the resistance from some hiding place and planning violence against the main church, from which he was ex-communicated in 2007.

Precious Shumba, spokesperson for Harare Diocese, told SW Radio Africa that it was Kunonga’s son who poisoned the mangos, with unfortunate consequences for himself.

“Kunonga’s son Rutendo reportedly sprayed mango trees with some undisclosed poisonous substance and unfortunately for him his son was playing outside picked one of the mangos and consumed it. Immediately he was taken very, very sick to Chinhoyi Hospital,” Shumba explained.

He added that the child recovered and is fortunately out danger. But the news was disturbing to many Anglicans, who said they believed the intention had been to poison those who in the main church who opposed Kunonga. Shumba said they had been told that police are dealing the matter.

Shumba said inventories will soon be completed and a total of how much is owed to local authorities and the power company, ZESA, will be known.

He added that those responsible for the unpaid bills will be held accountable. According to Shumba, an average of $3,000 is owed by parishes in urban areas, with those in remote locations owing an average of $1,000.

Regarding the clergy who had left the main church and followed Kunonga after the split, and those who are resisting the supreme Court order, Shumba said the Harare Bishop Chad Gandiya has advised that they are welcome to rejoin the church as ordinary citizens.

“The Bishop said these people have to be forgiven and where possible, re-admitted as ordinary people, starting afresh to be rebaptised, reconfirmed and inducted on Anglican values because they had been lost, physically and spiritually,” Shumba said.

In 2007 Kunonga unsuccessfully tried to withdraw his diocese from the Church Province of Central Africa (CPCA), claiming differences over the ordination of gay priests. Without the necessary two thirds majority support he still went ahead to unilaterally withdraw the diocese and form his own church.

Since 2008 Kunonga has seized over 90 properties belonging to the church, including the main Cathedral in Harare, 19 primary and secondary schools and several orphanages around the country. The seizures have been done with tacit support from Mugabe’s regime, that has also provided police to protect him. The Herald/SW Radio Africa

Tsvangirai insists Ncube should be involved