Will Kunonga be able to call on Mugabe?

DiasporaOpinionReligious
By Nehanda Radio On Nov 25, 2012 185 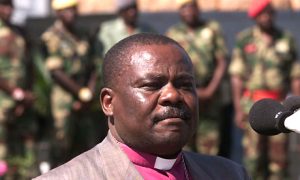 Outside Looking In: A letter from the diaspora

Many, perhaps the majority of Zimbabweans are Christians and Zimbabwean Anglicans cannot have been indifferent to the news coming out of the UK this week. The decision by the Anglican church not to appoint women bishops has led to a great deal discussion and media coverage.

All the signs had been that the Anglican church as a whole would support the appointment of women bishops when they already have women priests.

The Church of England is the established church of the country but that does not mean political influence is used in the same way as it is in Zimbabwe where Nolbert Kunonga, the defrocked Anglican priest, has openly declared his loyalty to Robert Mugabe and appears to have the support of the partisan police force.

The Police Act specifically bars police officers from joining in active politics but that does not prevent police officers, such as Chief Superintendent Mandikapa, from actively campaigning against Morgan Tsvangirai and, it is alleged, using police resources in the process.

That is not the sort of overt political interference that operates in the UK so it is unlikely that the issue of women bishops will be of concern to the British police unless the law is broken.

Women priests have been ordained in the UK since 1994, though it remains a contentious issue and not all Anglicans support the ordination of women. There are women bishops in several Commonwealth countries and the US, so it seems strange that the ‘mother church’ in the UK should be so clearly out of step on this issue.

In this century of equality for all, such a backward step means the Anglican church “has a lot of explaining to do” as the current Archbishop, Rowan Williams said.

All this may seem rather irrelevant to Zimbabwean Anglicans who have problems of their own in the shape of the self-appointed Bishop Kunonga who is still laying claim to the cathedral in Harare despite losing his case in the Supreme court and being ordered to return all the church property he has appropriated over the past five years.

In the course of his various ‘church grabs’ the ex-communicated Kunonga has run up enormous bills for utilities etc. and it seems likely that he will come face to face with the police over these unpaid bills.

Will Kunonga be able to call on Robert Mugabe for support? The two men certainly seem to have a great deal in common. Kunonga’s homophobic views reflect Mugabe’s own attitudes on the subject and it is hard to believe that either of them would support the issue of women bishops- or priests for that matter.

The real test of police impartiality will come if Kunonga defies the court as he has said he will. He is due to be evicted from the main cathedral in Harare on December 16th. With commendable Christian charity, Bishop Gandiya invited Kunonga to join the diocese he leads but the renegade priest has refused.

Meanwhile the properties Kunonga seized are to be ‘cleansed’ which says a lot about the man’s ‘unholy’ influence on everything he touches.

The whole affair is a clear object lesson not to mix politics and religion. In their desire to garner votes ahead of the elections in March 2013 Zanu PF will no doubt try to use people like Kunonga who is not above using the pulpit for political persuasion.

However, things are slowly changing in Zimbabwe and the verdict by a Bulawayo judge to sentence three Zanu PF killers to ten years each for the murder of an MDC villager gives reason to hope that people like Kunonga may no longer enjoy the protection of the police. We live in hope!

Yours in the (continuing) struggle Pauline Henson.

Outcry over MDC-T directive on primaries