Zimbabwean rappers Desmond “Stunner” Chideme and Alishias Musimbe aka Maskiri clearly don’t like each other. The beef between the two escalated this week with Maskiri describing Stunner as ‘stupid’.

According to reports Maskiri scoffed at claims by Stunner that he had an upper hand because he had staged shows overseas while his bitter rival had not.

“Why would you want to compare me with someone who has never been on a plane? My music travels (sic),” Stunner is quoted as having said in a discussion on social networking site Twitter.

Buoyed by his first ever upcoming tour to the United Kingdom next month, Maskiri however hit back saying;

“My friend, boarding a plane and singing are two different things. So, when he says that, he is lost. Whoever makes such an assertion is stupid and it is proof that they got exposed to the good life at an ‘old age’.”

The two have been at loggerheads since the release of Stunner’s “Team Hombe” album in which he described Maskiri as a spent force.

In one of the songs Stunner advises music fans to “dhilita Maskiri ndikusendere – urging fans to delete Maskiri’s songs from their playlist to create space for Stunner’s tracks.” 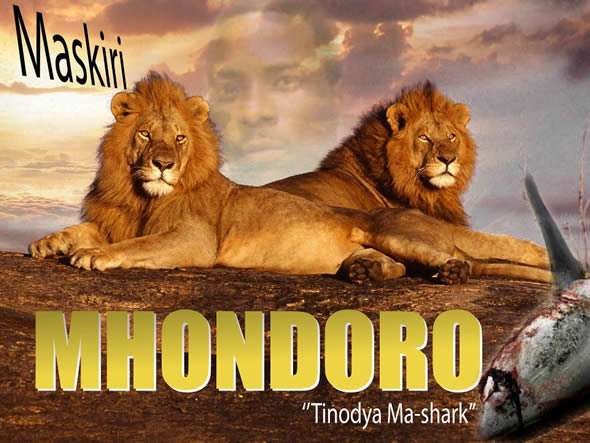 In response to this, a new album sleeve posted on social networking site Facebook recently shows Maskiri in the background of two male lions which had pounced on a shark gasping for air.

The picture is accompanied by the words “Mhondoro — Tinodya maShark – (we eat sharks)” an apparent reference to Stunner, who calls himself a shark in the song Godo.

Contacted for comment by the local NewsDay newspaper Stunner simply said: “Write what you want. I don’t have a comment.”