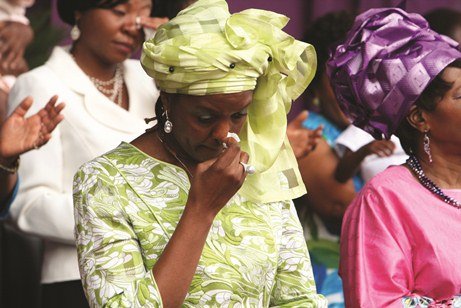 HARARE – First Lady Grace Mugabe broke into tears after women at a Christian conference lavished her with praise. The conference, which was organised by Zimbabwe Assemblies of God Africa (Zaoga) and other ministries, began on Thursday and ended yesterday with Grace making a star appearance.

After her tears dried up, it was Grace’s turn to return the favour. She lashed out at Zimbabweans who shunned local churches to fly outside the country in search of divine help. Grace might have felt it necessary to compliment the local church women after they sang in her honour.

She was visibly touched by the tribute from the church and first broke down when the choir sang a song in her honour.

Tweaking their church song to suit Grace, they sang: “Amai vedu mauya, zvamunoita kuDanhiko nekuMazowe tinozviona (We thank you for coming and for the great things you do for Danhiko project and your children’s home in Mazowe).’

She openly cried again when she was honouring a pastor who helps her look after the children at her Mazowe orphanage. Grace was emotional as she spoke about the children, reprimanding people from calling them orphans.

“I am very proud of these children and I feel happy that God made me a mother to all of them. These children that I am taking into the home, I take them as my own.

“Mine is not an orphanage, I call it a home for children. By the moment these children enter into the gates of Grace Mugabe village, they cease being orphans,” she said.

On the issue of people visiting prophets outside the country, Grace followed in the footsteps of her husband, President Robert Mugabe who attacked the new generation of celebrity prophets, most of whom are based in West Africa and are attracting Zimbabweans.

“Going up and down on planes, it is not proper. As the First Lady, I am in trouble as many people who go outside for prayers and come back, they come to me and say we have been told a prophecy about you and you need to read these books. I will not even go and collect them,” she said.

“Let us be satisfied that God gives us some people who can actually pray for us in this country. Some even fly to outside countries, saying ‘I need to be prayed for so that I get well’.

“Don’t we have people who can pray for healing here? Why don’t we believe in our prophets, are you trying to say that in Zimbabwe we cannot pray?” she said to ululation from the women.

Several high-rankling politicians from the MDC and Zanu PF have been trooping to West Africa, particularly Nigeria where they seek help from the likes of TB Joshua, a “prophet” who claims healing and other supernatural powers.

Diamonds worth $2 billion looted in Zimbabwe