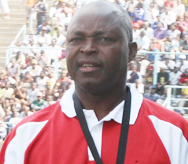 Sunday Chidzambwa has been forced to step down as the coach of South African premiership club Black Leopards following a life ban imposed by the Zimbabwe Football Association (Zifa) over the Asiagate match fixing scandal.

It’s being reported Chidzambwa will be reassigned to the post of director of coaching in a move that the Super Diski club feels will give the coach enough time in his battle to clear his name tainted by the scandal.

Zimbabwe’s most successful football coach, Chidzambwa, was one of the 15 officials and players slapped with life bans by Zifa following the conclusion of investigations into Asiagate by the association’s Independent Ethics Committee.

Chidzambwa remains free to coach in South Africa because world football governing body is yet to endorse the decisions taken by Zifa, to enable the sanctions to have a worldwide effect.

Our Scania has fallen

“Despite the fact that Chidzambwa’s ban has not yet been endorsed by FIFA and is therefore not in action yet, it looks as though Leopards’ owner, David Thidiela, is not taking any chances,” the website reported.

Black Leopards have had a decent start to their PSL campaign under Chidzambwa and will be sad to see him step aside after he got the club playing attacking football and guided them to only one defeat in their first eight games.

Our Scania has fallen