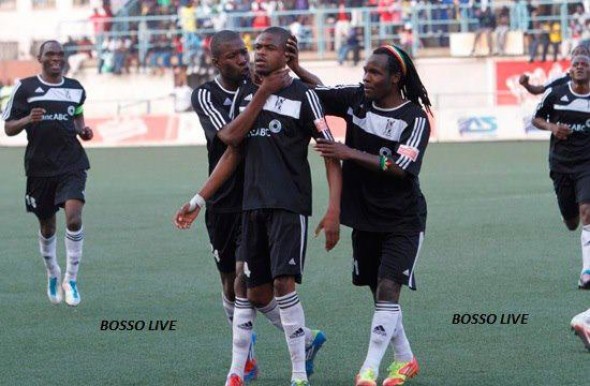 From Ricky Ricky Zililo in Bulawayo

HIGHLANDERS players yesterday continued with their strike over outstanding bonuses leaving their preparations for the weekend Mbada Diamonds Cup quarter-finals against Monomotapa in disarray.

Bosso players have been up in arms with their bosses since Wednesday last week and were expected to resume training on Monday but they failed as the players demanded that they be paid their dues in full.

The club owes them winning bonuses for their victories against Shabanie Mine, Hwange and Black Mambas. We have it on good authority that a winning bonus for each game is US$275 and this means that Highlanders owe their players US$14 850.

Kevin Kaindu, the Highlanders’ gaffer who had gone home to Zambia on private business when the strike started, was forced to cancel the team’s training sessions yesterday as less than 10 players were at the club office, sitting in the team bus.

According to sources, the players on Monday went to Hillside for their training but when they got there they refused to train demanding to be paid all their outstanding money. It is believed some members of the technical team are behind the industrial action.

They have been heard in public places criticising management and dismissing the probe into the club’s finances despite the fact that the preliminary investigations have revealed massive irregularities.

“This is a difficult time for me to comment about our coming game because of the situation (strike) we have. We missed last week and two days’ training sessions, Monday and today (yesterday) and in terms of fitness when we go to Hwange, the players will not be 100 percent fit.

“However, despite such challenges, we have to be positive and the players know what is at stake,” said Kaindu. The Zambian gaffer is chasing a unique league and cup double. On Friday, an unidentified well-wisher came to Highlanders’ rescue giving the club at least US$5 000 to clear part of the outstanding bonuses.

The money was transferred to the club’s account and yesterday the club’s chairman Peter Dube was hopeful that the transfer would go through. Highlanders, according to the source, will pay back the benefactor who has on three times availed resources for the team to travel for their away matches to Harare and Hwange.

“It is true that the players are refusing to train and it is also true that we owe them. We have never lied about the club’s coffers’ position and we will not lie to the players but we are doing everything we can to harness resources to pay them.

“As it is we are waiting for the funds from a well-wisher to go through so that we pay them. The member gave us money which will cover winning bonuses for one of the games. We are working around the clock to make sure that we clear players’ allowances,” Dube said.

Since the strike broke out, the executive has held two emergency meetings meant to deal with the players’ disgruntlement on Wednesday and Friday morning which were attended by Dube, his deputy Sikhanyiso Moyo and committee member Charles ‘Six-One’ Moyo.

They also had a joint meeting with the executive on Wednesday. The other executive members, secretary Andrew Tapela and treasurer Odiel Nkomo were conspicuous by their absence.

According to a senior management source, the executive is divided with part of it eager to see Dube’s empire crumbling while the other half has been looking for funds to sustain the operations of the club.

The source said everything started after the forensic audit, which the club undertook after allegations of financial mismanagement started a few months ago. Impeccable sources said a member of the technical team, who is supposed to be the bridge between the players and the executive, has been inciting the players to go on strike.

The source said the technical member told the players that the executive was misdirecting its priorities by settling Moyo’s US$3 000 bill, which he had lent the club before the away game against Monomotapa in Harare.

The present executive inherited about US$500 000 in debts from Themba Ndlela’s management and working closely with the board, they have been tackling the issue.

On the field of play, the players have done well making sure that the team is in the running for a league and cup double — the Mbada Holdings Diamonds Cup as well as the Castle Lager Premiership title which they last laid hands on in 2006. The Chronicle