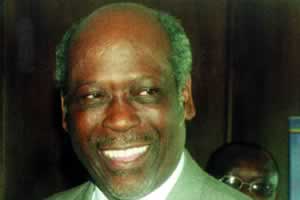 The late Higher Education Minister Stan Mudenge loved to decorate his speeches with colourful and bombastic language. Today we take time out to remember his most memorable quote ever.

Addressing a graduation ceremony at the Harare Polytechnic in 2010 the late historian and veteran diplomat denied claims that students were being prevented from writing exams over non-payment of fees.

“Such a claim is playing fandango dance with the facts. It is based on a farrago of confusion which has created a phantasmagoria of conflicting images of dreamland on the minds of the public,” he said.

Fandango is a lively couples dance, usually in triple metre, traditionally accompanied by guitars and castanets or hand-clapping (“palmas” in Spanish and Portuguese). Fandango can both be sung and danced.

As a result of the extravagant features of the dance, the word fandango is used as a synonym for “a quarrel,” “a big fuss,” or “a brilliant exploit.”

Phantasmagoria meanwhile is a fantastic sequence of haphazardly associative imagery, as seen in dreams or fever or a shifting series of phantasms, illusions, or deceptive appearances, again as in a dream or as created by the imagination.