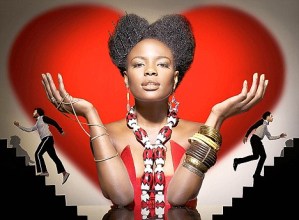 ENGLAND-based Zimbabwean indie rock sensation Shingai Shoniwa and her band, The Noisettes, were in Zimbabwe last week for a video shoot in Harare for a song on their latest album Contact.

The band is made up of Shoniwa and guitarist Dan Smith and is among some the best-selling bands in England, having gone platinum with their hit single Don’t Upset the Rhythm (Go Baby Go) which reached number two on the UK Singles Chart in 2009.

Rolling Stone magazine has described Shoniwa as “a living, breathing manifestation of the rock & roll spirit, with a voice that is equal parts Iggy Pop and Billie Holiday”. Film producer Rufaro Kaseke convinced Shoniwa to shoot the video at Amanzi Lodge in Chisipite, Harare.

“It is a beautiful video shot in high definition and will be screened on MTV soon.”

Shoniwa and Smith met at college 15 years ago at the BRIT School for Performing Arts & Technology and formed The Noisettes in 2003. They have toured Europe and the United States extensively.

Shoniwa’s mother, Leoba Kureya who travelled to Zimbabwe with her daughter, said she was thrilled by the experience.

“For Shoniwa I think going to her father’s village in Chishawasha and finding out about her family tree was a wonderful experience,” she said.

“This is just the beginning of homecoming for the Noisettes front-woman and bassist.”

The Noisettes performed at Oliver Mtukudzi’s birthday bash at Pakare Paye in Norton but were unable to attend the main concert held at Glamis Arena in Harare due to flight delays. Zimbabwe Independent

Dynamos march past Hwange at the Colliery

UK based Shingai releases video for ‘Coming Home’… filmed in the…