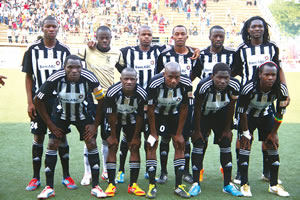 HIGHLANDERS coach Kevin Kaindu says they feel so lonely in this riveting championship battle, it appears the whole Premiership has ganged up against them. Bosso lost for the first time this season when their 23-match unbeaten run was brought to an end by an impressive Monomotapa at Rufaro on Saturday.

The Bulawayo giants did not know what hit them as they crashed to a humiliating 0-3 defeat. The result tipped the scales in favour of championship rivals Dynamos in this fierce battle for the Castle Lager Premiership title. DeMbare gained ground the next day with an easy 4-1 thrashing of Shabanie Mine.

Highlanders, who have enjoyed their finest run since 2006 when they last won the championship, were stunned not only by the defeat, but also by the unexpected margin of the loss.

There was a huge contingent of DeMbare fans at Rufaro on Saturday who cheered every touch by Monoz. Interestingly, after victory had been secured in emphatic fashion, the Monoz players celebrated with the Zora Butter dance routine, which is associated with DeMbare celebrations.

On Sunday, Monoz midfielder, Ronald “Rooney” Chitiyo, who was outstanding in the win over Bosso, was treated like a king by DeMbare fans when he arrived at Rufaro to watch the tie between the Glamour Boys and Shabanie.

The Bosso camp hasn’t been impressed, too, by Shabanie coach Luke Masomere’s pre-match comments, reiterating his love for DeMbare. Yesterday, Kaindu said it felt like they were fighting the whole world. “It seems like some people are ganging up against us,” said the Zambian coach.

“If you were at Rufaro on Saturday and saw the way Dynamos supporters celebrated with Monomotapa you will agree with me that it was not about us versus Monomotapa.

Monomotapa powered to victory courtesy of hat-trick hero Osborne Mukuradare to move to 43 points. They trail Highlanders by 10 points and are six points ahead of fourth placed Chicken Inn who drew 1-1 at Buffaloes.

Bosso who had seized pole position last week are now second on the log table with 53 points, two behind DeMbare.

Highlanders have enjoyed good returns this year with 15 victories and eight draws, a reflection of how much work the Zambian coach has invested to bring the former champions back to a state of competitiveness.

Bosso are still in with a big shout in the title race and could break the six-year drought if they pick up their pieces and continue with their good form this season. Kaindu said Highlanders will not mourn forever over one lost game as there are still 18 points to play for in the season.

“In football there are three results that should be expected. We all knew one day we could lose a match but it’s just unfortunate this defeat came at a time we were enjoying our game. It’s a game we lost and sadly it was our first loss.

“Definitely we have to focus on our next game and find ways to get back to the top. The league is still open for everyone because no team has been confirmed champions yet,” said Kaindu.

Bosso will host Black Mambas in their next assignment that will be followed by the blockbuster fixture at Rufaro when they will take on Dynamos. They will complete their programme with tricky dates against Buffaloes, Hardbody, FC Platinum and Blue Rangers.

“All the remaining games are now tricky. This is quite a difficult time for everyone because all teams now want nothing but maximum points either to push for the championship or to finish on a good position,” said Kaindu.

“We had a hectic travel arrangement last week when we went to play Hwange during the midweek and then afterwards we came to Harare to play Monomotapa. It’s part of the game. Football is a pressure game but it all goes down to how you handle it.

“The players will rest today (yesterday) but we will not relax because there is a lot of work to be done,” said Kaindu. The Herald