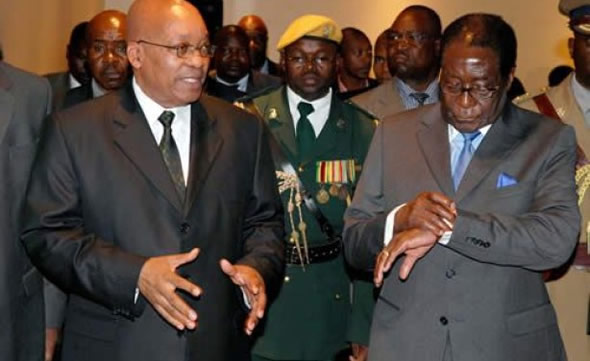 President Robert Mugabe has met with South African President Jacob Zuma on the sidelines of the United Nations general assembly in New York late on Tuesday and assured him that the adoption of a new constitution was on track.

All three parties in the coalition government came up with a draft constitution under the Constitutional Parliamentary Select Committee (COPAC) but Zanu PF made a dramatic u-turn seeking to ram through about 30 amendments.

We understand Mugabe has told Zuma that an all-stakeholders conference will be held in Harare next month where two documents will be put to the conference — the 150-page draft constitution and a national statistical report on opinions on proposed changes gathered at public meetings across the country.

The MDC-T led by Prime Minister Morgan Tsvangirai says the statistical report is not a true reflection of recorded opinions that were skewed by several “quantative not qualitative” factors, including ‘violent’ groups of the same Mugabe supporters being bussed to many of the public meetings.

“A Constitution is a product of both qualitative and quantitative processes. A quantitative only approach is a recipe for disaster because it will be a majoritarian dictatorship. A Constitution should be based on values and principles long settled in mature republics around the world.”

MDC-T Secretary General Tendai Biti described the Zanu PF draft constitution as ‘judicial fascism’. He said the party was acting like the “constitution is being made for one individual, the incumbent president Robert Mugabe. It is tragic and blasphemous to craft a constitution for and around an individual.”

Meanwhile COPAC on Wednesday announced that it had rescheduled the all-stakeholders conference from Oct.4 to Oct.13, citing cash shortages and delays in collecting funding for the gathering of 2,500 delegates.

DeMbare, Bosso Both With Tricky Away Ties