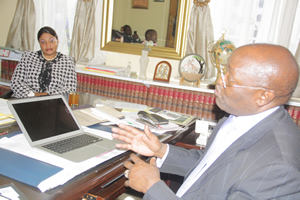 In the case, which many now feel has now been politicised beyond doubt, lawyer Jonathan Samukange claims Tsvangirai lied under oath in denying he ever married Karimatsenga under customary law.

The lawyers are now saying they intend to meet Zanu PF blue-eyed boy and controversially appointed Attorney-General Johannes Tomana as a follow up to a letter they wrote last week seeking Tsvangirai’s arrest.

Despite Tsvangirai ditching Karimatsenga last year in November, she says she is not yet done with the PM until he owns up to their ‘marriage’. Her lawyers say Section 183 of the Criminal Law (Codification and Reform Act) criminalises perjury and Tsvangirai lied under oath.

“He (PM Tsvangirai) made an affidavit in which he lied that he only paid damages. The same affidavit was used by the judge to dismiss our application. We spent three days going to the court striving to convince the court of the existence of a customary marriage when he knew he had paid lobola.”

Samukange, who is eying a parliamentary seat on a Zanu PF ticket, claims Tsvangirai also misled the court when he initially appeared before magistrate Munamato Mutevedzi seeking a marriage licence. The same licence was cancelled by Mutevedzi on Friday.

Speaking through her lawyer Karimatsenga said she was comfortable being in a polygamous marriage.

“We are not yet done with him until he has done the right thing. We have our custom, tradition and the rule of law, which the PM was sworn to safeguard jealously. The rule of law requires that he obeys it as enunciated by the legislature. She (Ms Karimatsenga) is nowhere near divorcing the PM or giving him gupuro because of his marriage to Macheka.

“It is his problem and he has to sort it out himself,” he said.

Samukange dismissed claims by the PM’s lieutenants that the court applications were concocted by State security agents and the premier’s political rivals.

“This is utter rubbish. It is nonsensical. All those organisations (CIO and Zanu-PF) are not involved in the cases. We had no intention to wash this matter in the public. Locardia is personally hurt. He impregnated her, marries and just dumps her. Worse still, the same person goes to the next village and marries another one.”

He added: “After all that pain and suffering, people conclude that she is being used by CIO and Zanu-PF. This means she cannot think for herself and that she only has to wait for the CIO to think for her. That is unfair.”

Samukange said Tsvangirai demonstrated high levels of stubbornness by attempting to terminate the marriage to Ms Karimatsenga through a US$1 divorce token. “We have a custom of how we marry and divorce. I believe the PM was simply being stubborn by tendering the token through a magistrate.”

“The honorable Mr Justice Bhunu dismissed the urgent chamber application early this morning. There will be no wedding. We apparently have to locate Locadia in appropriate circumstance, give her a dollar or something and ask her to take the same to her father as a divorce token.

“Thereafter it appears we have to confirm to the father, “in the cultural way” that we sent off his daughter with the coin or whatever it is. The problem is this, it has been suggested that culturally, she has to be sent off with the divorce token from the “matrimonial home”.

The danger is this, either she refuses to come to the “matrimonial home” or she comes and refuses to leave. In the latter event you have to go to court for an order of ejectment for you can’t take the law into your own hands.

“Critically (I got my hands burnt once for using that word in evidence, but would dare repeat it!), her political handlers will ensure that she denies ever receiving the divorce token. On the contrary they will point to a further act of sexual intercourse and claim she has now conceived!”