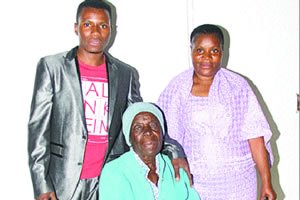 By Ruth Butaumocho recently in Kwekwe

Upcoming musician Peter Moyo last week held a house warming party with family and close friends at his new home in Mbizo 20, Kwekwe. The young artiste made the party a memo­rable occasion which began on Thursday and spilled over into Friday morning, amid pomp and fanfare.

The simple occasion saw his family, among them his late father’s maternal grandmother Mbuya Chihera, and his friends showering him with praises for fulfilling Dhewa’s dream of owning a house. Clad in a grey suit, Peter looked at ease, as he watched his family and friends wine and dine, while being entertained by a group of youthful dancers from the community.

With no A-list celebrities and other local artistes in attendance save for a few members of the Utakataka Express, it could have easily passed for another party in the hood. But this did not dampen the party mood. The newly completed house is a modest three-bedroomed structure on a 500 square-metre piece of land, right in the heart of Mbizo.

Tongai started the project but could not finish it owing to ill-health. When he died in October last year, the house had barely reached window level, leaving Peter with the task of seeing it to completion. In an interview, Peter said he decided to complete the house in fulfilment of his father’s wish of replacing the house the family sold to meet the late musician’s astronomical bills.

“We had a house in Mbizo 7, but the family resolved to sell it in 2003 after it dawned on us that none of us would be able to settle his (Tongai) medical bills, which continued to escalate as his condition wors­ened.

“Even when the media reported that Ton­gai had no house despite his celebrity status, we could not talk about what had happened to his old house,” he said.

Peter added that he was not talking about it because he wanted to correct a public percep­tion that people had about his father, whom he described as “my hero”. “I am bringing this issue into the public domain in the hope that the media will finally put the case to rest,” he said.

However, contrary to media reports that the young musician had moved in, Peter and his siblings are still living in their rented Msasa Park house. “We have not yet moved into the house because there were some things that needed to be ironed out. If everything goes according to plan, we will move in within a week or so,” he said. The Herald