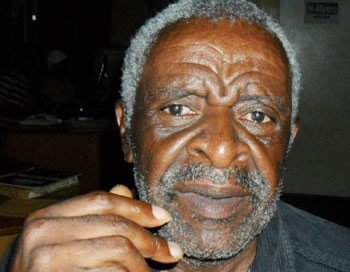 Unlike his former jovial self that would be spotted at bars joking with friends with his favourite beer in hand, Bhonzo now walks along Harare streets with a Bible in his hand — often stopping along the way to read one or two scriptures — in an apparently thoughtful mood.

Asked whether he is seeking divine intervention following a spate of misfortunes that include losing his voice and helplessly watching fire destroy his Chitungwiza house, Bhonzo could neither deny nor confirm his apparent religious turnaround.

From gardener to MBA graduate . . . Actor Timmy shares his…

“The Bible is now my friend and I read it every time. I am not confined to any church but I believe God is there for everybody,” said an emotional Bhonzo, who now struggles to speak. He said he regularly attended church but could not disclose the name of his denomination.

For many comedy lovers, the name Bhonzo evokes a string of humorous memories. Famed for his lead role in the television series Bhonzo Nechikwata, the actor, broadcaster and advertiser is ranked among the most talented artists of his era. His powerful voice was always outstanding and unmistakable.

The voice was a natural gift put to good use.

But successive misfortunes have over the past years drained all the energy, humour and creativity from the veteran artist. After battling a blood pressure-related ailment for almost two years, Bhonzo lost most of his household property when his house was gutted by fire in December last year.

His six-roomed house is still to be renovated. The lounge that used to house sofas, a fridge, a television set, computer, radio and other electrical gadgets is now an empty space, save for two old garden chairs. Broken asbestos sheets have been heaped on burnt beams as a makeshift roof.

Bhonzo, who is not employed, survives from donations from well-wishers. But his fellow counterpart Timothy “Timmy” Tapfumaneyi is doing well in life after getting a job with an insurance company. Zimbabwe Standard