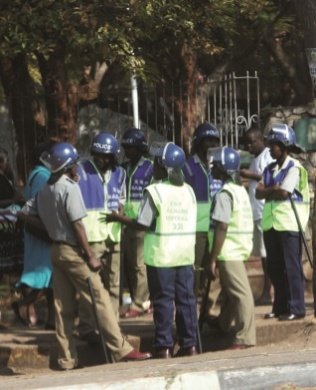 HARARE – Zimbabwe’s soldiers who had demanded a huge stake in the country’s census have given in and agreed to a Cabinet decision that relegated them to covering barracks and related areas. The soldiers this week went on a rampage disrupting the planned training of enumerators.

President Robert Mugabe issued a circular ordering the soldiers off but some remained defiant. Training of enumerators was supposed to start at various centres around the country on Tuesday this week but was abandoned after the disruptions.

The army had demanded inclusion of 10 000 soldiers and other security agents to be part of the 31 000 enumerators, but according to acting Finance minister Gorden Moyo, only 1 500 officers had been approved by government.

“They have always participated in making sure there is peace and participated as enumerators in the barracks and related areas, so we do not see a problem with the solution we have put in place. We are simply sticking to a formula that works in which the security sector has a defined role to play,” Mutambara said.

Mutambara tried to put on a brave face saying government was committed to carrying out a credible census.

Mutambara said they had met ministers in the security cluster and agreed to follow the traditional way and precedence set with previous censuses.

“We met this morning with Defence minister Emmerson Mnangagwa, State Security minister Sydney Sekeramayi and the co-ministers of Home Affairs Kembo Mohadi and Theresa Makone and officials from those ministries.

“What we have done is to put our house in order and bring harmony on the subject of Census 2012. So, I want to emphasise that we have had a very productive meeting with those ministers and we have brought harmony and alignment which will guarantee a credible outcome,” said Mutambara.

Moyo concurred saying the census will now proceed as planned.

“The 2012 census is proceeding as planned with enumeration starting on the night of the 17th and 18th of August. It has been observed that this is an important national exercise and everyone with a role to play will do so appropriately.”

“We appeal to all Zimbabweans to ensure that this is conducted successfully. The training that was suspended is starting tomorrow (today) and all our enumerators have been asked to report to their respective centres for training which will be conducted during the holiday,” he said.

Members of the army, CIO and other security agents this week caused pandemonium after invading centres where civilian government workers expected to undergo training as census enumerators had gathered, leaving the process in limbo.

Chaotic scenes characterised several registration centres in different parts of the country, with security forces taking centre stage in all cases. Irate teachers’ groups have threatened to pull out if the uniformed forces continued hijacking the process and government then suspended the process.

Reports yesterday indicated a flurry of activity in diplomatic circles as regional countries panicked over the behaviour of the military.

Ahead of the Maputo meeting, Sadc is now worried that if the soldiers can disrupt a civilian process such as the census, then it is likely they can do even worse during the highly polarised referendum and elections expected next year. Daily News

AAG Vice President on the run over $250k theft