Zanu PF ‘a typewriter in an internet café’ 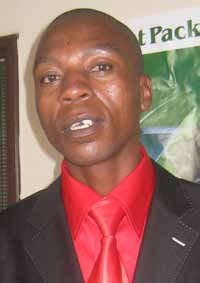 The long, narrow and winding road to Freedom farm in Chipinge is almost reminiscent of the painful and pedantic journey traversed by the late Reverend Ndabaningi Sithole as he fought for the liberation of Zimbabwe.

A turn to the right brings you to Chako business centre, itself a heart for humble economic activity compared to the hubbub and razzmatazz of glitzy Harare some 500km away.

Last Saturday at 12PM, Prime Minister Morgan Tsvangirai’s humble three-car motorcade turned left at this business centre, a cloud of dust billowing in its wake as it manoeuvred its way along a poor dusty road, past a narrow bridge before turning left into the late Reverend Sithole’s property.

Welcome to the loamy soils of Freedom farm in Chipinge West where one of Zimbabwe’s liberation icons lies in the dark rictus of death. There was tumultuous applause as the Prime Minister joined the thousands of people who had turned up at the memorial of the late Ndabaningi, or “Magigwana”, as his Ndau community fondly called him.

It was to be a hectic four hours of poetry, music, dance and speeches as people from across the political, tribal and religious divide paid tribute to the late Ndabaningi.

His children and members of his Zanu Ndonga party thanked the MDC and its leadership for assisting in arranging the memorial of this illustrious son of the soil.The big message coming from that kaleidoscopic crowd of many political colours was that hero status is not conferred by individuals. Hero status is conferred by one’s legacy; indeed by one’s contribution to the country of their birth.

Zanu PF may think otherwise, living in the delusion that its motley group called the Politburo has the power and authority to confer hero status, but the message from Chipinge was that Ndabaningi is a national hero, whether the Poliburo likes it or not.

The people of Zimbabwe are slowly rewriting their history. They are beginning to correct the warped narrative of our national story as depicted by Chenjerai Hunzvi’s interment at the national shrine while Ndabaningi lies in the soft requiem of death at a hillside in the loamy and parched soils of Chipinge.

Prime Minister Tsvangirai told the crowd that Ndabaningi was a true national hero who had played his part in liberating the country. He urged the family to derive comfort in the fact that theirs was a shared loss as the whole country had lost a liberation icon.

He said some of the liberators had betrayed the values of our collective struggle and had turned into tormentors of their own people.

A few years after independence, the Prime Minister said, Zimbabweans had woken up to the reality that independence and freedom were two different things. African nations had painfully realised that independence could come without freedoms, leaving it hollow and meaningless.

Tsvangirai said the challenge lay with the new crop of African leaders to wage a third liberation that would result in true freedoms, food and jobs. True leadership must inspire, the Prime Minister said, as exemplified by real leaders such as the late Ndabaningi. True leadership comes from the people who reserve the right to elect leaders.

“The people must feel free to remove their leaders from office. Even I as Morgan Tsvangirai must be removed from office if I fail to deliver on promises to the people,” the Premier said to thunderous applause.

He concluded by saying that when the time comes, true heroes such as the late Magigwana would be buried at places befitting their status. The gathering at the burial shrine of the late Rev. Sithole was a major testament of his national appeal.

It was clear that the Ndau community felt that Tsvangirai was an embodiment of the new African leadership that cares; a leadership that puts national interest above petty partisan politics.

They know that Tsvangirai was there at his burial and here he was once again at Magigwana’s memorial while those that had fought alongside him had failed to recognise the significance of his contribution in the struggle.

As a man of the cloth and a former chairman of Zanu PF, Musharuka’s record in the fight against colonialism is indelible. The MDC leader’s participation at this memorial stamped his unstinting respect to the true heroes of our national struggle. And it is no coincidence that he did so a week before the commemoration of our Heroes’ Day, which has now been privatised by a political party.

Ndabaningi suffered at the hands of his former comrades and at one time had to seek asylum in the United States, away from those with whom he had waged a brutal struggle against injustice. He was vilified and faced trumped up treason charges in a desperate attempt to erase his legacy.

The fact that he lies buried at the family farm and not at the Heroes’ Acre will neither dampen nor obliterate his contribution to the Zimbabwean narrative.

It was important to pay tribute to Rev. Sithole and the Ndau community for leading the way in the democratic struggle against a one party State. The Ndau have always believed in asserting their quest for freedom as evidenced by their consistent rejection of the Zanu PF politics of patronage since the early 80s.

Like Binga, Chipinge remains a marginalised enclave that continues to be punished for its consistency in rejecting Zanu PF at the ballot box. The skewed development levels across the country make a compelling case for the need for a devolved State.

As we drove away from Freedom farm, the Ndau dance and song still reverberating in our minds, it became evident that a people will always know who its heroes are. The people will not wait for the Politburo to pronounce or confer heroes on their behalf; they will continue to tell their own story and to carve out their own narrative.

Zanu PF is clearly living out of its time. Like the dinosaur, the signs are there that Zanu PF is slowly failing to adapt to the dictates of the brave 21st century. Yes, the party is clearly out of place in today’s world. It has become a typewriter in an internet café.

Luke Tamborinyoka is the Principal Director of Communications and Spokesperson to Prime Minister Morgan Tsvangirai. He can be contacted at mhoful@yahoo.co.uk