Chinese managers sodomize workers at mine 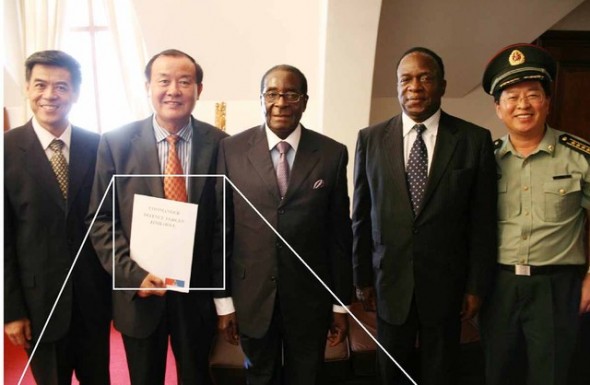 A decision by controversial diamond mining firm Anjin Investments to suspend 1,500 workers, who went on strike demanding better pay and working conditions, has opened up a can of worms with several workers speaking out for the first time.

In an interview with SW Radio Africa on Wednesday one worker, who refused to be named for fear of victimisation, told us Chinese managers at the firm were throwing away the bones of people buried in the area now currently being mined.

Such graves have been discovered at Jessie Mine in Chiadzwa and despite objections from the workers that the deceased be given decent reburials, the Chinese managers are claiming these are ‘donkey bones’ and the workers should not kick up a fuss over them.

“Where we are working at Anjin there are graves of people who were sometime long back buried. They managed to relocate some of these graves but there are other graves which were left. So during mining people would come across these graves, which means removal of some of these bones,” the worker told us.

“The workers are not happy about that. We thought maybe our relatives could have some proper and decent burials,” he said. Asked how many people or graves were involved he said: “There are so many graves that were left. So far the graves that have been dug, there are about three of them.”

When diamonds were discovered in the Marange district the army quickly moved in and began slaughtering hundreds of illegal panners, using helicopter gunships and shooting panners in the back as they fled. Human rights activists say many victims were buried in mass graves in the area.

We have been unable to verify if these are some of the graves that have been dug up.

But so concerned are the workers they have taken photos of the graves and they intend to use them as evidence to show what is happening at Anjin. The company is a joint venture between senior chefs in the Zimbabwean army and the Chinese, who run the firm and seem to have carte blanche to do as they please.

Another very serious allegation is that three Chinese managers have been sodomising workers. The managers have reportedly provided a letter of apology and management has promised that the culprits would be deported back to China. But this has not happened and the perpetrators continue working at the firm.

The workers went on strike last month demanding at least $650 for the lowest paid worker, instead of the paltry $235 they are currently getting a month. Management responded by suspending 1,500 workers for 4 days (Monday to Thursday). The head of the workers committee, Tavengwa Chitima, was also fired last month.

Apparently the workers are only allowed to recognise the Chinese Lunar New Year on 22nd January.

A recent High Court ruling that the strike was illegal has also given the management more leverage to harass and intimidate the workers. But the workers were set to appeal this ruling on Thursday.

In June this year Global Witness, a human rights group focused on the exploitation of natural resources, recommended an investigation into the activities of mysterious Chinese business tycoon Sam Pa, diamond firm Anjin and Sino Zimbabwe to see if they “risk funding future human rights abuses.”

The report titled, “Financing a Parallel government”, exposed how the Central Intelligence Organisation , army and police chiefs were involved in the diamond, cotton and property sectors. The ownership structures of companies like Anjin were exposed as being dominated by senior members of the state security.

Half of Anjin’s shares are said to be held by Brigadier-General Charles Tarumbwa, a Zimbabwean military lawyer. Global Witness recommended the passing of legislation that bans serving and recently retired members of state security agencies “from control over, or beneficial ownership of, mining companies.” SW Radio Africa