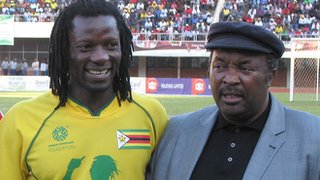 Almost a decade after leaving Jomo Cosmos, Zimbabwe international Benjani Mwaruwari could make a sensational return and rejoin the team for one more dance.

Benjani joined Jomo Cosmos in 1999 and became a darling to coach Jomo Sono who facilitated his move to Europe. But after 10 years in Europe, Benjani is back in South Africa and is on the verge of rejoining Jomo Cosmos, who were relegated from the South African Premiership at the end of last season.

According to the club’s website, the former Zimbabwe skipper joined the team’s training session on Monday. “But of course it all depends on the outcome of the discussions between both parties,” Sono says.

Benjani was the Jomo Cosmos star, as well as the league’s Player of the Year in 2001 and enjoys a good relationship with Ezenkosi boss Sono. The player told the club’s website that “there’s a distinct possibility of teaming up with the Cosmos family this season” if negotiations go in his favour.

Club owner Sono was in Zimbabwe in May to support the launch of the Benjani Mwaruwari Foundation. If the former Manchester City and Portsmouth striker eventually signs for Jomo Cosmos, he would be quality addition to the combination of Aleni Lebyane, Richard Danse and Modibo Sidibe.

Benjani is not the only Zimbabwean at Jomo Cosmos as former Warriors’ teammates Harrington Shereni and Joseph Ngwenya are also at the club. Both players had accompanied Benjani to training on Monday morning and were spotted in training with the rest of the squad.

Utility player Shereni, last played for Nantes in the French Ligue 2, while Ngwenya, who plays as an attacking midfielder, was previously on the books of Major Soccer League side DC United in the United States.

Chinese managers sodomize workers at mine