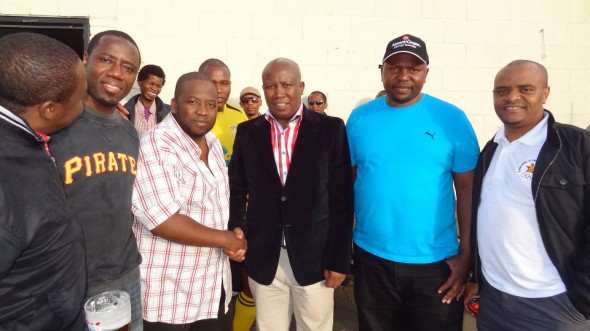 Julius Malema, the former leader of the Youth League of South Africa’s ruling African National Congress, shocked Zimbabwean revellers enjoying an afternoon barbecue at a sports club in London on Sunday by turning up unannounced.

The firebrand, who was recently expelled from the ANC for his radical views and attacks on President Jacob Zuma, is in London to meet investors. He is expected to speak at a networking event on Tuesday night. Guests will pay £20 to hear Malema speak.

Malema’s arrival at the Rollers Club – a summer barbecue spot for Southern African expats held at the Chingford Rugby Club – surprised many.

Revellers temporarily abandoned their meat and whipped out their phones to get pictures taken with the 31-year-old champion of nationalisation of mines and land reform in South Africa.

Malema, who is in London with the Youth League’s former spokesman Floyd Shivambu, was later joined by pal Zayne ‘Mahoota’ Sibika of the legendary kwaito group, Trompies. Mahoota, who now performs solo as a club DJ, had just concluded his two-gig UK tour.

Marshall Gore, the Rollers Club organiser, busied himself trying to offer his famous guest the full VIP treatment. Gore later posted a picture of himself with Malema on Facebook, telling friends: “We clicked from the word go.”

Other pictures showed Malema and Gore having dinner with the former world heavyweight boxing champion Lenox Lewis at the exclusive Italian restaurant, Scalini.

Malema told the BBC Focus on Africa TV programme that the agenda of his trip to London was to explain “our economic struggle which seeks to redistribute the wealth of the country into the hands of the people”.

He added: “Most investors have misinterpreted that, not only investors but our fellow African brothers who are here in Britain.”

Together with Shivambu and members of a new organisation called Friends of the ANC Youth League, he said they had been “doing a lot of work behind closed doors” to explain the policies he advocated.

He added: “What we are clarifying is that we are not talking about a wholesale nationalisation, we are not calling for a shutdown of private participation both in the land and agricultural activities and the mining sector in South Africa, but what we are for is a greater participation and control by the state which will go in many instances into partnership with the private sector.”

Malema and his allies who remain in the ANC are pushing for Zuma’s ouster as party leader at the party’s congress ion December. He defended his recent attacks on Zuma’s sex life – he has at least 21 children and four wives – insisting that the criticism was not personal.

“We are not attacking him on a personal level… that is political. Any practice in the name of culture that perpetuates gender discrimination and humiliates women we will never agree to it,” Malema said.

“As a revolutionary, he should have known better that he should not participate in cultural activities that perpetuate gender stereotypes.”

Malema insists he still has a future in the ANC – but only after Zuma leaves as leader of the party.

“I am coming back to the ANC in December,” he told the BBC. “Once we remove President Zuma, because we are going to remove him successfully in December, and then I will walk into that conference and shake his hand and proceed to occupy my rightful seat.” New Zimbabwe.com

Draft constitution as seen by a non-lawyer